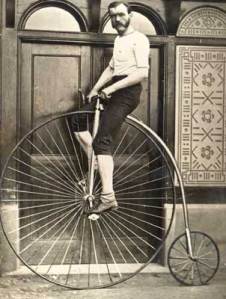 Almost exactly nine years ago, I became a bicycle commuter, and some missed days due to illness, injury, or ice and/or snow notwithstanding, I’m proud to say that I’m still pedaling to work, rain or shine, five days a week.

One of the things I love about being a bicycle commuter is sharing an experience with cyclists locally, here in bicycle-friendly Bellingham, and globally, who ride these two-wheel contraptions for a wide variety of reasons: transportation, recreation, competition, fundraising, and activism just to name a few.

In the past week, I’ve come across three items on the web, two of them local, which reinforced my feelings of solidarity with the cycling community.

First, from one of my favorite publications, Ode Magazine, a nice big-picture piece on what the author is calling bicycle touring renaissance.

As recently as the 1980s, cycling in the U.S. was viewed as mostly for kids living on cul-de-sacs. The advent of group rides, especially charity rides, changed that in the 1990s…

Touring does take some training. But the reward, and it’s major, is a fully self-contained outing, which lets you soak up everything the universe offers and think only about routes, weather, food, water and shelter. That’s about as “sustainable” as travel can get.

Second, an arguably frivolous piece from Western Washington University’s student newspaper, The Western Front, on the pros and cons of riding a bicycle while intoxicated.

Western seniors Peter Morgan and Fred Carley like riding bikes. They also like drinking beer. On a cold and rainy night in November 2008, Morgan, Carley and a few other students officially combined the two into an event called park and ride. At each of Bellingham’s major parks, participants stop to drink a beer – or two – for a zigzagging, 25-mile bike ride, usually ending downtown…

Bicycling under the influence is illegal in some states, and was so in Washington until the 1995 Montesano v. Wells case, where the Washington state Court of Appeals determined drunk driving laws were not intended for bicycles. However, neither the ruling nor the law are well known, and rumors that bicycling drunk can get the rider in legal trouble are common among cyclists.

And finally, this past Saturday was an event that I was disappointed to miss, as it combined my beloved cycling with a fundraiser for the Pickford Film Center, the group that runs the cinema where I saw the movie I just happened to write about yesterday.

Bellingham will host a late-night cycling event known as the Moonlight Ramble on Saturday, Oct. 3.

The event will kick off with live music by The Endorphins at 9 p.m. at Western Washington University outside of the Wade King Student Recreation Center. There also will be a bike repair station, bike safety information and a variety of vendors. WWU’s Outdoor Center will be selling bike lights, which are required for the Moonlight Ramble, for $15.

The ride itself will begin at 11 p.m., and riders will go on a seven-mile tour of Bellingham starting at WWU, through Fairhaven, Boulevard Park and downtown. More experienced riders are encouraged to take a couple of laps around the route.

So, if all that doesn’t inspire you to get on your bike and ride, maybe this will: