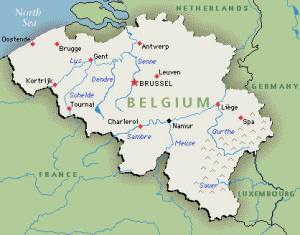 When I read this morning that the European Union has elected a Belgian, Prime Minister Herman van Rompuy, as their new president, I didn’t think much of it. After all, Belgium is an incredibly vanilla, low-key, non-aggressive country that a lot of people, especially Americans, know very little about.

What could possibly be the harm?

Well, then, a few hours later, I read the following on my beloved Boundary Bay Brewery‘s Facebook Page:

Boundary Bay Brewery our brewers today are crafting a Belgian Tripel. Admittedly odd for us, but our contender for 2010 Seattle Belgianfest http://bit.ly/URKaW

Coincidence? I think not!

Boundary Bay has NEVER brewed Belgian ales before as far as I know, and I’ve been going there religiously ever since they opened in 1995.

And, all of a sudden, out of nowhere, The Washington Beer Commission decides to announce its “1st Annual Belgianfest.” That’s “1st Annual”, meaning they’re not just planning on having one fest, they’re going to make it an annual tradition?

What the HELL is going on here?!

This van Rompuy guy is obviously a force to be reckoned with, not wasting any time before exercising his new EU muscle.

Is this just the beginning of new era of Belgian world dominance? We’ll just have to wait and see.

I, for one, will be keeping an eye on them.

(Ironically, I happen to like Belgian beers, but that’s just the kind of vulnerability a political force hellbent on taking over the world will exploit.)