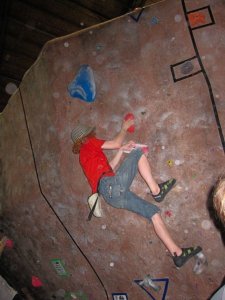 Today I’m just beaming with pride and have decided to exercise my parental privilege to unapologetically brag about my kid.

I’ve got two very different things to report on:

1. See that nimble rock climber over there? That’s my awesome 12-year old son Julian, a kid so cool he wears a black-and-white checkered fedora while climbing, even while competing in the regionals, as he is in this photo from a while back.

I was reading the other day about rock climbing legend Chris Sharma, and as it turns out Sharma started climbing when he was, wait for it, 12! Well, Julian’s been climbing off and on since he was probably around 6, he joined the climbing team at the Whatcom Family YMCA in the Fall of 2009, and we just finished building this in his bedroom: 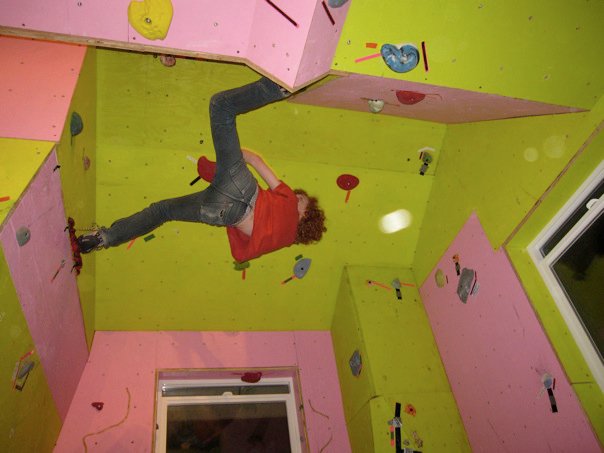 Take a careful look. No, the photo is not rotated 90 degrees. See the windows? Yeah, he’s like a little Spider-Man in training!

Anyway, he’ll be competing in the Edgeworks T-Town Climbing Challenge in Tacoma this Saturday, and I look so forward to cheering him on.

2. Last night I attended the Science Fair at Julian’s school and had a great time, as I always do at that event. The lower and upper elementary classrooms put together projects ranging from the impressive (a rocket powered by water pressure) to the hilarious (a tooth in a glass of Coke in an attempt to bust the myth of the legendary corrosive nature of the beverage).

Julian spent some time online researching ideas for his project, and decided to study the drag effect on raw, soft-boiled, and hard-boiled eggs. I got to be with him as he worked on developing his hypothesis, determining the variables, conducting the experiment, collecting the data, and reflecting on the results. His hypothesis was that the hard-boiled egg would spin longer, because the liquid in the raw egg moves around as the egg spins, creating more drag. But, nothing could have prepared me for his reaction when, as the hard-boiled egg finally stopped spinning, the stopwatch read that it had spun for a full 40 seconds longer than the raw egg.

Julian let out a hoot of elation that I never in a million years thought he could muster for a science project.

I’m smiling just thinking about it again, the kind of smile that comes straight from the heart.