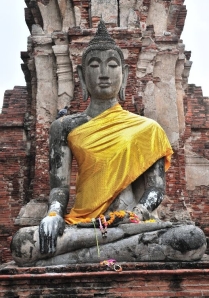 The news out of Thailand this morning is simply heartbreaking.

I’ve spent more than my share of time railing against the Biblical and Koranic religions for their history of violence, and while I don’t feel the need to call myself a Buddhist, I do feel spiritually aligned with Buddhism, for many reasons, not the least of which is the commitment to ahimsa, or non-violence.

And yet, violence is raging in Thailand, in a country where 94.6% of the people are Buddhist.

BANGKOK — Thai troops Wednesday stormed the fortified encampment of anti-government protesters in downtown Bangkok, breaking through bamboo barricades and killing at least two protesters in a crackdown after weeks of clashes that have killed dozens.

Once inside the protest zone, troops fired M-16 rifles at fleeing protesters and shouted, “Come out and surrender or we’ll kill you.”

So, in the absence of a religion that condones violent action if violent action is deemed appropriate, politics steps in and screws everything up. Read enough about the current conflict, and it will be conspicuous that it has nothing at all to do with religion.

Thailand is a land of such extreme contradictions, and it starts at the top.

According to Wikipedia (my emphasis in bold):

The country is a kingdom, a constitutional monarchy with King Bhumibol Adulyadej, the ninth king of the House of Chakri, who has reigned since 1946, making him the world’s longest-serving current head of state and the longest-reigning monarch in Thai history. The king is officially titled Head of State, the Head of the Armed Forces, an Upholder of the Buddhist religion, and the Defender of all Faiths.

The king also happens to be the richest monarch in the world, with a personal net worth of US$35 billion, according to Forbes. So, I guess the ‘Upholder of the Buddhist religion’ didn’t get the memo that Prince Siddhartha abandoned his life of privilege in favor of ascetic meditation and service through teaching.

Another of King Bhumibol Adulyadej‘s contradictions concerns his murky role in Thai politics:

Although Bhumibol is legally a constitutional monarch, he has made several decisive interventions in Thai politics. He was credited with facilitating Thailand’s transition to democracy in the 1990s, although he has supported some military regimes, including Sarit Dhanarajata’s during the 1960s and the Council for National Security in 2006-2008. He has been accused of interfering in politics, although this would be unconstitutional of him and accusers are liable to be charged with lèse majesté. During his long reign he has seen over 15 coups, 16 constitutions, and 27 changes of prime ministers. He has also used his influence to stop military coups, including attempts in 1981 and 1985.

15 coups, 16 constitutions, and 27 prime ministers in 64 years…not so surprising when a description of the political parties at play in Thailand resembles a scene from Monty Python’s Life of Brian (my emphasis in bold):

The National United Front of Democracy Against Dictatorship (UDD), whose supporters are commonly called “Red Shirts”, is a political pressure group in Thailand, opposed to the People’s Alliance for Democracy (PAD)…The UDD allies itself with the For Thais Party, which is currently in opposition to the coalition government…

The UDD stopped protests after the 2007 general election, which the People’s Power Party won. In response to violent anti-government PAD rallies and the “Yellow Shirt” seizure of Government House in May 2008, the UDD organized counter demonstrations, which would sporadically result in injuries and deaths.

It would nearly be funny if it weren’t so tragic, but then, sometimes, humor is the only sane way to deal with the madnesses in the world.