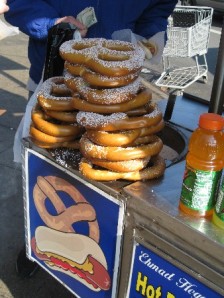 It all started when the New York Times dissed a treasured memory from my past.

IT’S easy to knock the New York street pretzel — tasteless as “Jersey Shore,” dry as a vacant lot in August, tough as a water bug.

Listen, there are things we loved when we were younger that just don’t stand the test of time. For instance, when I was kid I thought Mel Brooks’ Blazing Saddles was, hands down, the funniest movie ever made. And yet, after having not seen the film for nearly 20 years, I watched it recently with my 12-year old son (inconveniently forgetting how much profanity it contained), and found it to be, on the whole, terrible.

Still, I pretty much had a smile on my face the whole time and I did laugh out loud quite a bit, but when I thought about why I had those reactions I discovered something that will eventually bring this tangent back around to the humble New York City pushcart pretzel.

You see, my smiles and laughter had little to do with whether or not the scenes were funny, and they had everything to do with the fact that my friends and I recited those lines from memory, hundreds and hundreds of times, over many years. As I laughed, I could see my friend Keith acting out Slim Pickens’ nearly reprehensible “Number Six” bit.

Keith absolutely killed that one!

I’m sure that if I had a pretzel from a New York City pushcart today I’d probably find the pretzel itself as disappointing as Blazing Saddles. After all, I’ve become somewhat of a food snob over the years. But then, I have no doubt that the overall experience would be incredibly positive, the experience of going to New York, my favorite city, of walking down, let’s say, 5th Avenue, stopping at some hole-in-the-wall tavern for a few beers, then, back in the crosscurrent of people rushing to a million different places, of coming across a pushcart, of ordering one of those enormous pretzels, of taking the plastic mustard bottle and squeezing the mustard out in a continuous line, tracing the continuous dough tied in that iconic knot, of eating away at that pretzel as I continue on my way, towards Central Park, finishing my low-brow snack in time to take in some high-brow at the Metropolitan Museum of Art.

To me, a New York street pretzel is all those things, not just some tasteless dough covered with salt and mustard.

4 thoughts on “The Redeeming Power of Nostalgia”