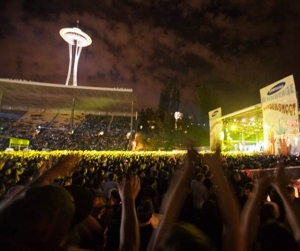 So, someone at Paste really needs to proofread more.

Bumbershoot, the West Coast’s response to summer festivals with mystifying monikers, released the lineup for its 40th annual throwdown yesterday via Bumbershoot.org.

Yeah, doesn’t make any sense, does it?

Now, in some ways, it’s actually a funny thing for me to be coming to the defense of Bumbershoot. After all, I haven’t made the 90-minute trip south to the festival in many years. Whether it’s been an aversion to holiday traffic, the crowds at Seattle Center, or competing fun Labor Day weekend activities, I haven’t been to Bumbershoot in over 10 years.

That said, I’ve seen some great performances there, from disparate acts like The Ramones, Joan Baez, and the Indigo Girls, to an incredible 1997 Mainstage lineup of Michael Penn, Sheryl Crow, and Wilco.

And with news that Bob Dylan, Neko Case, and The Decemberists will be the Bumbershoot 2010 Saturday night Mainstage lineup, this might just be the year that pulls me back in.