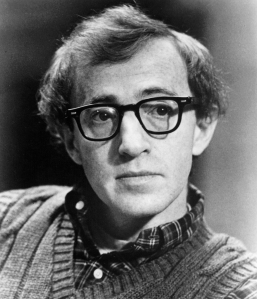 A friend of mine said earlier today that he has given up on the Seattle Mariners even though they’ve won three in a row after an incredibly bad May, because whenever he gives up on them they do good and when he starts thinking they have a chance to contend they play like crap.

Another friend, in response, said, “In that case, could you also give up on the Seahawks, the Sounders scoring goals, the weather, and me winning the lottery?”

And then I said, “If only life was really like that.”

Last week I wrote about how my friends and I have quoted lines from Mel Brooks’ Blazing Saddles many hundreds of times over the years, but if there was any other filmmaker who we’ve quoted more it would be Woody Allen. Now, when you engage in this kind of thing it is often the case that some of these lines become part of your personal lexicon.

Thanks to the YouTube community, I now share that very scene with you here for today’s edition of Video Fridays. Happy Weekend, everyone!