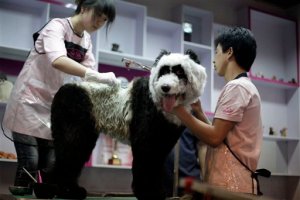 Listen, I love animals. Really. I do!

But I’ve had a problem with pets my whole life. I know, humans domesticated a slew of different animals hundreds of years ago and there’s nothing I can do about it. There’s no turning back. And, while I’ve had pets I was close with over the years — my childhood Poodle, the cat I had in college, my old Malamute, my current Siamese cat — I’ve never been able to shake the sad thought that animals were all free once and now so many are dependent on humans, threatened by humans, or both.

Enter China. The Communist government there used to ban pets, but, alas, capitalism’s influence has created a boom in pet ownership, and now, the latest fad: dog dying.

No, that’s not a panda. That’s an Old English sheepdog groomed and dyed to look like a panda. Isn’t it cuuuuuute! Don’t you want one too?!

Sure, but take a look at Spiderwoman. How degrading! You can see the resignation and humiliation in the little Bichon’s eyes. You can almost hear her say, “They used to love me and my white, fuzzy fur. Then one day I just wasn’t good enough. Sigh.”