With Electric Vehicles (EVs) so obviously something we desperately need it’s painful to see how slowly they are coming along. Given the urgency of global climate change, given the current regrettable opportunity to leverage the plummeting public approval of oil as a result of the BP spill, from a purely layman’s perspective it seems like there’s a simple two-part strategy screaming out to be implemented: make EVs 1) affordable and 2) convenient and they will sell like crazy…and the companies that produce the cars, batteries, and charging technologies will make billions! It’s an all-around win…

Today I’ve come across some good news and some not so good news on the EV front.

First up, concerning affordability, for purposes of full disclosure, I’ve never purchased a car for more than $10K. That the average cost of a new car in 2010 is $28,400, and millions of people dish out that kind of money thinking it’s just what cars cost, doesn’t make me think for a minute that I’m just ultracheap or out of touch or both. It’s a matter of what will actually get people driving EVs as quickly as possible, and that’s why this caught my attention:

Ultra energy-efficient cars don’t always have to come with a high price tag. One upcoming vehicle from Renault-Nissan and India’s Bajaj Auto will, in fact, cost just $3,000 and reach an impressive 70 mpg.

The mini-car, nicknamed ULC (Ultra Low Cost, perhaps?), is expected to go on sale on India in 2011. Approximately 200,000 cars are expected to be sold each year.

Of course, the Bajaj/Renault-Nissan car won’t be the only efficient, low-cost vehicle on India’s roads. The Tata Nano, which costs just $2,160, gets 51.7 mpg on city road conditions and 61.1 mpg on highways.

…So while the Nano is a bit cheaper, the Bajaj car will win out on efficiency — at least until Tata releases an electric model.

And, while the electric Nano will most certainly be more expensive than the gas model, even if it cost $7K more it would still be in my unusually low price range. Let’s face it, the Nissan Leaf and Chevy Volt, at three times the price, much less the Tesla at many, many more times the price, won’t get people out of their gas guzzlers and into EVs nearly as quickly as something priced radically low. As for business concerns, this should all be about high-volume sales.

Next, concerning convenience, also from Inhabitat: 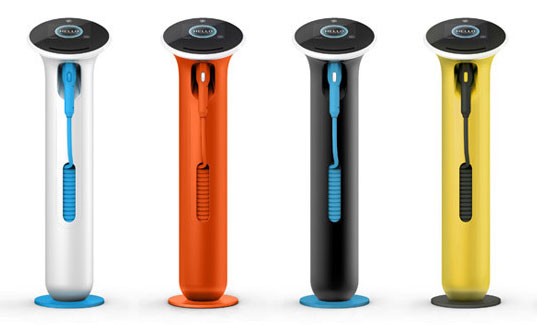 If you read Inhabitat on the regular, you know that two topics we’re gaga about are electric vehicles and industrial design mastermind Yves Béhar. That’s why we’re thrilled to announce that Béhar and his studio fuseproject teamed up with GE to create a brand new electric vehicle (EV) charger called the WattStation™ — and word on the street is it can power up cars in just 4 to 8 hours (as compared to the standard 12 to 18 hours of other stations)…

GE is planning to release the first WattStations in 2011 for city streets, but fuseproject and GE are working on models for personal use in homes and garages too.

Now THAT’S the idea! These things need to be even more omnipresent than gas stations and they have to work fast. That they look cool anticipates possible opposition on eye-sore grounds. Smart.

In the meantime, MUCH more needs to be done, but a recent Wall Street Journal article isn’t exactly optimisitc, and includes a quote that makes the same case I’m making here:

“The only way to get off oil is with a system that’s cheaper than gasoline, and more convenient than gasoline,” [Shai Agassi, founder of Better Place, an EV battery swapping and charging technology company] says. “I can’t raise the investment in the U.S. to put this (Better Place) on the ground.”