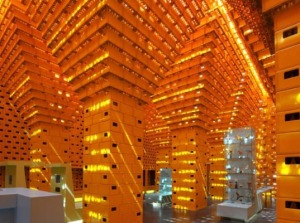 You can say what you want about the potential evils of drinking alcohol — obnoxious behavior, self-destructive addiction, abuse of others, turning automobiles into weapons of mass destruction — but then the artful structure you see here to the right wouldn’t exist if a lot of people hadn’t consumed a lot of beer.

Why beer crates? “Understanding that the sense of the temporary can only be truly successful when it is free of waste, the pavilion is built using an unusual and ephemeral component which after the event returns to its normal daily use,” say SHSH on their site. One of the coolest things about the pavilion is that it isn’t a purely rectangular space – inside, the crates are stacked to form architectural features such as columns, arches and even domes.

While they don’t specify what type of beer was in those crates, this was built in Brussels, Belgium, and Belgians are known for their brewing…and their ambitions of world domination, which I wrote about in November 2009.