As I mentioned yesterday, I have a real problem with the massive and still growing economic inequality on our planet.

A study by the World Institute for Development Economics Research at United Nations University reports that the richest 1% of adults alone owned 40% of global assets in the year 2000. The three richest people possess more financial assets than the lowest 48 nations, combined. The combined wealth of the 10 million dollar millionaires grew to nearly $41 trillion in 2008. In 2001, 46.4% of people in sub-Saharan Africa were living in extreme poverty. Nearly half of all Indian children are undernourished, however even among the wealthiest fifth one third of children are malnourished.

Here in the U.S., according to the Economic Policy Institute (EPI):

America’s wealthiest households in 2009 had net worth that was 225 times greater than the median family net worth.

And, as the EPI points out, it is remarkable how this disparity rose to a record high during and in spite of the Great Recession. 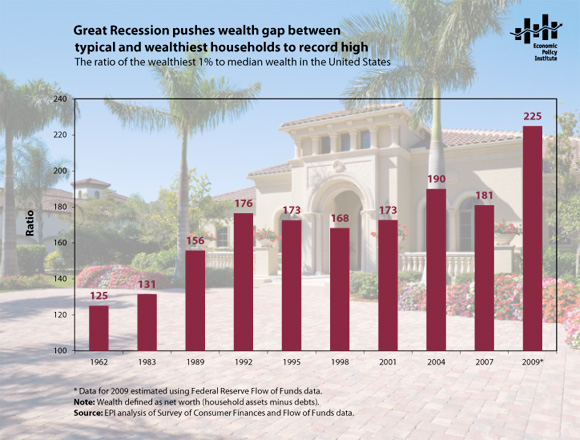 We have a situation where a massive, global financial crisis was caused by large, under-regulated financial services companies operating in a multi-billion dollar industry…

It was superwealthy players, not the general public, who pushed for financial deregulation and thereby set the stage for the economic crisis of 2008-9, a crisis whose aftermath is the main reason for the current budget crunch.

…while millions of people have lost their jobs, their homes, their healthcare, etc., and the rich have gotten richer.

So, what do the rich and rich-owned politicians suggest we do about?

Why, cut government spending, of course, spending that predominantly supports the poor, working, and middle classes.

And what do they have the nerve to euphemistically call these cuts?

Meanwhile, the spending cuts talk is heating up in the U.S. capital, according to the New York Times, “Spending by the Department of Health and Human Services would decline in 2012 for the first time in the agency’s 30-year history under President Obama’s budget request…,” and yet Republicans are mocking the budget for not cutting enough.

Here in Washington State, where we have a $5 billion dollar budget deficit, state agencies, counties, cities, other municipalities, and average citizens are bracing for a 2011-2013 biennium state budget that massively cuts spending on things that they and their constituents rely on, such as education, health care, public safety, etc., with a draft from the governor that contains no increase in taxes in a state with the most regressive tax system in the country.

All this, while news from Germany suggests that “austerity” doesn’t even work.

How long will people stand for this?

Well, as it turns out, all across the globe, people are waking up and speaking out against austerity; Sarah van Gelder in Yes! Magazine suggests that there’s a connection between the Wisconsin demonstrations and the uprisings in Egypt and elsewhere in the Arab world; and Paul Krugman suggests that the Wisconsin situation (a situation that has now spread to Indiana), is not about the budget per se, but rather, it’s about power, an uprising against a clear move in the U.S. from functional democracy towards a third-world-style oligarchy.

These are momentous and turbulent times. Here’s hoping that some lasting justice will come of all this.