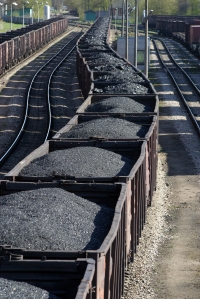 There’s quite a drama brewing here in Bellingham, Washington, my adopted hometown of 18 years, out on the edge of Puget Sound.

A little north of town, at Cherry Point, there is some land that has been designated for industrial use for many, many years. It’s already home to two oil refineries and an aluminum smelter, and yet it’s also adjacent to a 3,000 acre offshore aquatic reserve, created in 2000, with a new management plan implemented in November 2010 that garnered praise by both environmentalists and the local industries.

However, now there’s momentum building for the addition of a major shipping terminal at Cherry Point, a project that has stirred up passions from camps both for and against.

The treehuggers (a group that I’m mostly aligned with) are concerned about the impacts on the aquatic reserve, other natural habitats in the area, and particularly worried about the amount of coal dust that escapes into the air as the train rolls through town, since coal cars, such as those pictured here, are not covered.

The free market preachers, on the other hand, argue that they are tired of treehuggers saying no to everything and slowing down economic growth with their nitpicky worries about the trees, plants, and animals that don’t need jobs and don’t appear to contribute to the local economy.

All the more refreshing, then, to read this in today’s The Bellingham Herald:

A community group has been organized to gather information about the potential impact of increased rail traffic through the city if the Gateway Pacific cargo terminal is built at Cherry Point.

The group is called Communitywise Bellingham, and it has a website up and running.

“The big focus from my standpoint is adding light rather than heat to the conversation,” said Patricia Decker, a former city planning director who is heading the effort with her husband, Jack Delay…

But rather than oppose the project, Decker and Delay say they want to gather information and make sure that Bellingham impacts are considered and minimized as part of the study and permit process.

The truth is that the current economic situation in our county and state are a perfect setup for making hasty public policy decisions that could bite us in the ass down the road. Yes, we need more tax revenue and we need family wage jobs, but we also need clean air, clean water, herring, and salmon, and all manner of birds and mammals, etc.

So, good on Communitywise Bellingham for their fair-minded approach. The proposed operator of the shipping terminal, SSA Marine, has to complete a two-year environmental impact study anyway, a process that will provide for public input at various stages. Communitywise Bellingham is simply an effort to organize like-minded individuals who wish to participate in that public input process, to empower them to exercise their right to provide that input, and to ensure that their input is well-informed, fact-based, and persuasive.