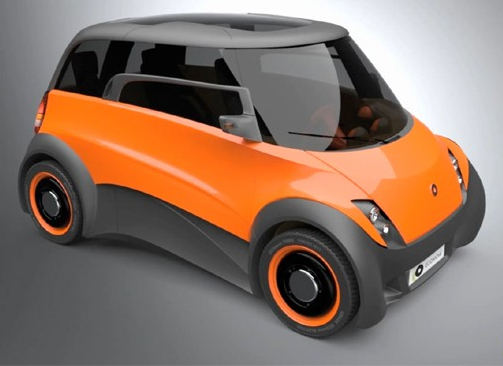 Thanks to one of my favorite websites, Engadget, I’ve come across a LOT of exciting Electric Vehicle (EV) news this past week, with six posts just in the past three days.

I thought I’d start out with the beauty you see here to the right: the oddly named QBEAK.

From Danish company ECOmove — be sure to click on the tiny British flag in the upper right corner of the page for the English version of the site…and Americans, yes, this is an indicator as to how the Danes feel about us — this tiny thing is cool looking and has several attributes that make it stand out.

Motors embedded in the wheels, compact suspension, seats 3 or 6 (in the case of the latter, exactly how is not clear) people, and it gets an impressive 186 miles to a charge (compared to the Nissan Leaf‘s 100 miles). That last spec is something that really stands out for me, because that’s enough range to get me from here in Bellingham, up to Vancouver, B.C. or down to Seattle, with plenty of power left to cruise around town for the day and then plug it in for a charge overnight. (Granted, that assumes readily accessible charging stations that will hopefully be more abundant in the next 5-10 years.)

Now, I have no idea how much the QBEAK costs, but according to ECOmove’s website I could reserve one, due out in mid-2012, for as low as EUR 270 ($382 US). This is important to me, as I’ve written before, because I feel that the key to worldwide EV replacement of gasoline vehicles, from both a consumer and producer perspective, is to make EVs as affordable as possible.

Moving on, we find news about: