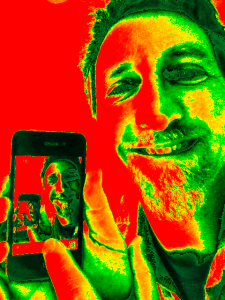 I got my first cellphone right around the time when the iPod skyrocketed in popularity, and though I did not get any credit or remuneration, it was totally my idea to combine the two devices.

I was thinking about all the people I was spotting, with their phones on one hip and their iPods on the other, and I just knew that no one, including myself, really wanted to look like they were wearing a Batman utility belt.

Now, you’d think that by the time the iPhone finally came out in 2007 that I’d be one of those fanatics who camped out on the sidewalk in front of the store the night before, in order to nab one as soon as the doors opened in the morning…but, I wasn’t.

No, the truth is that I wasn’t ready to pay for a data plan. I had Internet at work, Wi-Fi at home, Wi-Fi was becoming more ubiquitous at coffee shops and the like, and so I boycotted the iPhone because Apple and AT&T required that you buy a data plan, not offering the option to only connect to the Internet when Wi-Fi was available.

And yet, friends (yes, I’m talking about you, Tom) had the iPhone and they shamelessly flaunted their gorgeous touch screens at every turn, and I was so taken in by the interface that, a year later, I did a 180° on my no-utility-belt policy and bought the iPod Touch.

Oh, I truly love the iPod Touch, but carrying a cellphone and the iPod eventually got really, really old…

…and then the iPhone 4 came out…and the redesign blew my mind. Apple had managed to take a product that had become an icon, transformed it into a work of art, and yet retained the underlying iPhone identity.

I wanted it as soon as I laid eyes on it, but the money wasn’t available, I wasn’t eligible for an upgrade, and, as I wrote last month, the rumors about what might be coming in the iPhone 5 sucked me into that classic technology vortex: Should I wait or not?

Well, as soon as I saw a recent mockup of the iPhone 5, reportedly based on insider descriptions, a mockup that seems to abandon the iPhone 4 design that I love so much, it was like a switch got flipped, the decision had been made, the iPhone 4 was to be mine, even though the 5 was rumored to offer a larger screen, higher megapixel camera, and faster processor.

Reasoning: I’d learned with the iPod Touch that the screen size was not good enough for extensive web browsing, blogging, or watching long-ish videos (I have a netbook for that); I didn’t need anything better than the 5 megapixel camera; and the processor on the iPhone 4 would already be MUCH faster than on my 2nd Generation iPod Touch.

And so, since last Friday, the iPhone 4 is mine…and I’m LOVING it!!!

8 thoughts on “The iPhone Is Mine!”