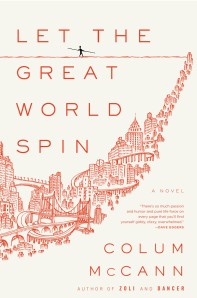 So, I’m just a little over 100 pages into Colum McCann‘s 2009 novel, Let The Great World Spin, and I find myself unable to wait until I finish the book before writing something about it.

It’s an absolutely stunning piece of work, the product of a real virtuoso writer, a writer who wields the English language seemingly with tremendous ease, painting pictures both impressionistic and rich in detail, with a story line unleashed from rigid chronology, and narration duties passing from one character to another.

And to top it all off, it is, by far, the most powerfully emotional book I’ve read in a long time, if not ever. Just about every few pages I find myself ripped open, unable to read on, needing to take a few-minutes break, overwhelmed by feelings.

Since I’m not a book reviewer by trade and this is decidedly not intended as a comprehensive book review, I’m not going to take the time to provide a full synopsis of the book. Hopefully you’ll take my word for it and read it yourself.

However, I can’t bear to leave you empty-handed, so I’ll touch on one passage that took my breath away.

One of the plot lines concerns a wealthy Park Avenue (New York City) woman, Claire, about whom we learn all kinds of details in a very slow, methodical way, mainly, at first, by simply observing her starting her day and preparing for guests to arrive. It’s clear from the start that there’s much more to Claire than meets the eye. Something nagging. Something’s off. There’s a husband and a son who are just alluded to, but absent. There’s a group of women with whom she has just recently started getting together, all of them new to her, but you don’t know how they met and whether or not there’s a purpose to their regular meetings.

And then the heart of the matter is revealed:

Oh, the day Joshua first shaved! Oh, the day! Covered himself in foam. So very careful with the razor. Made an avenue through the cheek, but nicked himself on the neck. Tore off a tiny piece of his Daddy’s Wall Street Journal. Licked it and pasted it to the wound. The business page clotting his blood. Walked around with the paper on his neck for an hour. He had to wet it to get it off. She had stood at the bathroom door, smiling. My big tall boy, shaving. Long ago, long ago. The simple things come back to us. They rest for a moment by our ribcages then suddenly reach in and twist our hearts a notch backward.

No newspapers big enough to paste him back together in Saigon.

There’s no question that this hits me especially hard because I’m a father of a son. Who knows? It could be that on some level it hits me particularly hard because I have a son whose name begins with the letter J.

Regardless, the primary metaphor in use here, to borrow it myself, is surgical, like a scalpel down the chest to expose a devastated heart. Who hasn’t cringed when watching someone shaving in a movie or TV show? Oh, how the blades of war butcher our offspring.

Now, I should say that not everything in Let The Great World Spin is so intense. McCann’s greatness resides partly in his ability to move the reader with subtlety as well.

Ok, I lied, I’ll share one more passage, to illustrate how the author can touch the heart with sweetness as much as with tragedy.

One of the many things my brother, Corrigan, and I loved about our mother was that she was a fine musician…Our mother played with a natural touch, even though she suffered from a hand which she had broken many times. We never knew the origin of the break: it was something left in silence. When she finished playing she would lightly rub the back of her wrist. I used to think of the notes still trilling through the bones, as if they could skip from one to the other, over the breakage. I can still after all these years sit in the museum of those afternoons and recall the light spilling across the carpet. At times our mother put her arms around us both, and then guided our hands so that we could clang down hard on the keys.

It is not fashionable anymore, I suppose, to have a regard for one’s mother in the way my brother and I had then, in the mid-1950s, when the noise outside the window was mostly wind and sea chime. One looks for the chink in the armor, the leg of the piano shorter than the other, the sadness that would detach us from her, but the truth is we enjoyed each other, all three of us, and never so evidently as those Sundays when the rain fell gray over Dublin Bay and the squalls blew fresh against the windowpane.

One thought on “Colum McCann: Let The Great World Spin”