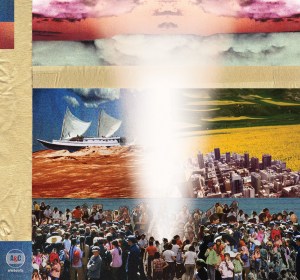 As has been well-documented here at Fish & Bicycles, I am very often late to the party when it comes to music. (See posts on my belated discovery of: Death Cab For Cutie, The Flaming Lips, Portishead, Menomena.)

In the case of the latter, as I wrote in January, I discovered Menomena just in time for one of the founding members of the trio, Brent Knopf, to up and quit.

And now, I’ve gone and fallen for another band that’s been around for a while, the Canadian collective known as Broken Social Scene, founded in 1999, only to find out that just one month ago Broken Social Scene, um, broke up, or, as it’s being referred to in the press: an indefinite hiatus.

After listening through it several times and watching quite a few videos of the band performing, I’m particularly impressed with their ability to make musically interesting music, with lush layers and ebbing and flowing dynamics, all while not doing anything particularly complicated. I like how they cover a variety of tempos and moods, how they can be at turns garage rockin’, mellow and moody, or even experimental psychedelic.

Fortunately, I’ve got their three other albums to explore, as well as the two Broken Social Scene Presents: releases, which are basically solo albums by core Broken Social Scene members Kevin Drew and Brendan Canning, and there’s always the chance that by the time I’m done digesting all of that the band will reunite.

In the meantime, a music post without a video wouldn’t be much of a music post, would it? So, here are two songs from Forgiveness Rock Record, the first featuring Kevin Drew on vocals, the second Brendan Canning: