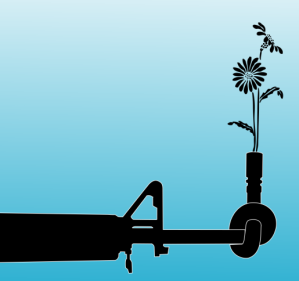 I came across two stories today related to U.S. military sustainability efforts, to which I had two competing reactions, and initially, as a blogger, I found myself stuck as to which direction to go in.

And so, here’s the result of having not been able to decide between the two.

1. The Navy has purchased 450,000 gallons of biofuel, to be used in jets, a destroyer, and a cruiser. The fuel cost $12 billion, 8 times what it would cost for the same amount of oil.

2. The Army and the Environmental Protection Agency have teamed up for a new program called “Net Zero”, the goal of which is to, “implement technologies for resource conservation, renewable energy and energy self-sufficiency on Army bases.”

Glass Half-Full: Just as the military developed the Internet and transformed the world, perhaps it’s best that we once again take advantage of our country’s enormous defense budget and use some of their money and expertise to develop actually viable alternative, renewable energy. After all, climate change is a threat to national security, so it’s fitting that the Department of Defense should be tasked with defending us from this threat. Right?

Glass Half-Empty: There’s just something so disturbingly ironic about the idea of the military taking a leadership role in the use of alternative fuels. As I wrote back in October 2010 (scroll to last three paragraphs), it’s classic zero-sum: save some lives by contributing less to global climate change, so that we can more effectively wipe out lives on the battlefield.

While my heart says that war and sustainability are antithetical and mutually exclusive, given that the U.S. will not be abandoning its military-industrial complex anytime soon, if these forays into conservation and alternative fuels can possibly expedite our country’s move toward more sustainable consumption and energy, perhaps this should be seen as a silver lining.