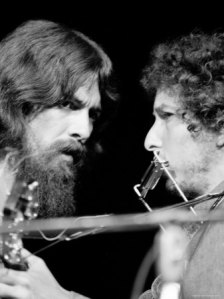 The Argument is legendary amongst a circle of friends I’ve been lucky enough to know since grade school. We’re all from New Jersey, where arguing is a pastime rather than a friendship-threatening conflict, we’re all very passionate about music, the arts in general, politically several shades of liberal, from far-left to center-left, and The Argument has resurfaced many times over nearly 30 years.

But the instance of The Argument that I remember most vividly took place sometime in the late 1980s, in our favorite pizzeria, Taverna Della Pizzeria in Spotswood, NJ, and it started when someone asserted the opinion that Bob Dylan, over the course of his long, illustrious career, should have leveraged his celebrity more to support important social causes; that he abandoned his activist roots and the legacy of his hero Woody Guthrie to be just another vain rock star celebrity.

This position was strenuously attacked by another from the group, who argued that it is actually oppressive to musicians, actors, dancers, painters, etc., to demand that they have any obligation to anything other than the pursuit of their art; that once you impose any “shoulds” on them you are interfering with the free flow of their creative expression.

Over the years, The Argument expanded beyond Dylan, to include pretty much every other form of celebrity, but when I read this morning that Dylan has authorized the use of his music for a just-released 4-CD set of covers, by 80 artists of 75 of his songs, with proceeds going to Amnesty International, memories of The Argument came rushing back, and I found myself jumping to Bob’s defense.

While it certainly is true that Dylan abruptly abandoned his activism roughly around the time he abandoned purist folk music in the mid 1960s, it is not at all accurate to argue that he abandoned it entirely or forever.

After his famed 1966 motorcycle accident, which I wrote about back in November, and which seemed to wake him up from an intoxicating celebrity binge, the first live appearance he made in twenty months was for a Woody Guthrie memorial concert, clear proof that he still valued the protest tradition. The photo I include here is from three years later, at the 1971 Concert For Bangladesh, later that year he recorded a song mourning the death of Black Panther George Jackson, and four years later he recorded the song Hurricane, a passionate defense of boxer Rubin “Hurricane” Carter, whom he felt was wrongly imprisoned on murder charges.

In the years since, Dylan has appeared at other benefit concerts, lent his songs to benefit albums, and now we have the Amnesty International collection, which will raise thousands and thousands of badly needed dollars for an essential civil rights advocacy organization.

As for the broader topic, whether or not celebrities have an obligation to use their fame for good, I’m inclined to see valid points from both sides of The Argument. The idea that they need to “give something back” is overly simplistic, and it really doesn’t work, as they’ve already given of themselves via the production of their work. Personally, I treasure the work of artists, much of which has meant so much to me over the years that I can’t imagine a world without it. These are true gifts, regardless of the financial rewards earned by their creators.

Additionally, I do believe that it’s important for creative freedom and development to not put artists into confining boxes, demanding specifics from them, but I do admire artists who do add their voices to worthy causes.

4 thoughts on “The Question of Celebrity Obligation”