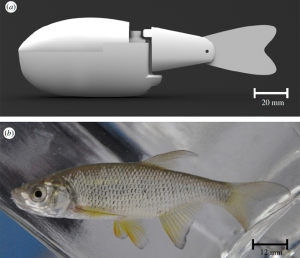 You gotta love this catchy headline from a Wired article today:

…and the story itself is VERY interesting:

To help investigate the dynamics of fish schooling, Marras and Porfiri designed a robot inspired by Notemigonus crysoleucas, a species of Golden shiner. The plastic-covered robofish was twice the size of the real fish but mimicked its back-and-forth tail motion.

When the researchers plopped single Golden shiners into a water tunnel meant to simulate a stream-like current, each fish swam in school-like positions near their robotic counterparts for several minutes. Around a robot that didn’t move, however, the Golden shiners swam randomly for shorter periods of time.

Although some fish kept a wary distance ahead of the robot — they may have perceived it as a threat — most kept pace by trailing in the machine’s watery wake. The behavior matched that of fish in the wild, which group into schools to reduce drag and make swimming more efficient.

Now, sometimes I read science journalism and I’m blown away by the vast amount of time that scientists spend on what seems, to me, to be the most boring and trivial matters. (It’s a good thing, then, that I’m no scientist.)

When it comes to animal behavior research, in particular, my heart often goes out to the critters being studied, how the scientists try to mess with their heads in order to learn more about how they tick.

In the case of the Golden shiners, however, it might just turn out to be for their own good:

“If accepted by the animals, robotic fish may act as leaders and drive them away from human-induced ecological disasters that are affecting life in aquatic environments, such as oil spills, and man-made structures, such as dams,” the authors wrote.

7 thoughts on “Scientists Messing With Lemmings Of The Sea”