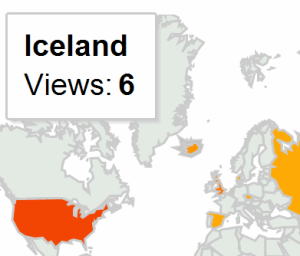 As mentioned last week, Fish & Bicycles is poised to take over the world.

In my first post on the subject, I named a few key countries that were glowingly absent from my stats page, and in my second I welcomed my first visitors from Greece.

Well, it seems this public outing of countries who have not discovered the joys of Fish & Bicycles is proving rather successful.

Logging in today, I see that Iceland has put aside her frustration over having been misnamed (Yes, Greenland, I’m looking at you.), and I’m told that six Icelanders have now paid me a visit. (I hope they saw my post declaring my love for Icelandic pop music from December 2011.)

Other countries named last week that have now come to their senses:

Mongolia, I really don’t know how well you get on with your next-door neighbor, Kazakhstan, but you gotta admit that they’ve got one of the coolest names of any country on the map, so why not say hello and recommend Fish & Bicycles to them? (Actually, I reserve the right to say the same thing about the other “-stan” countries in your region. Uzbekistan is an awesome name, and Kyrgyzstan gets props for making one’s eyes go blurry, trying to figure out how to pronounce it. How cool is that?)

Chile, a warm welcome to you. Friends of mine were there recently, exploring Patagonia. Thanks for showing them a great time. You’ve distinguished yourself above all of your South American neighbors on the west coast. I’d be grateful if you could spread the word to Colombia, Ecuador, Peru, and Bolivia. Thanks!

And all you other countries out there, be warned, I’ll call you out as well, as long as I have to, if you don’t take a moment to say hello.

Mwah, ha, ha, ha! World domination is within my grasp!

5 thoughts on “Fish & Bicycles Continues To Conquer The World”