So, let’s say you’re a fish, and you’re just swimming along, minding your own business, when all of a sudden you get sucked into this thing: 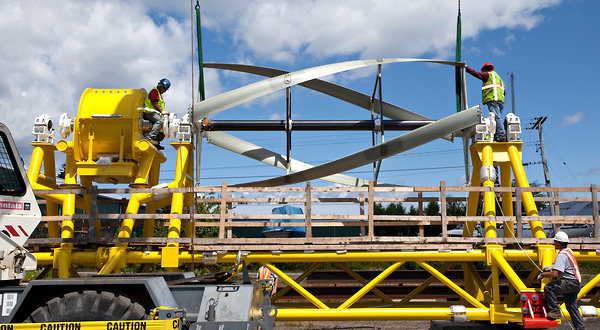 I suspect that sea mammals wouldn’t like it very much either.

But, let’s say you’re a human, and you’ve been ravishing the planet at an alarming rate, polluting it to the point where it’s starting to fight back, and you come up with this idea for generating electricity without using fossil fuels, there’s no unsightly smoke stacks or scary-looking nuclear reactors, in fact most of the mechanisms for capturing the energy we need so badly are conveniently hidden beneath the sea, out of plain sight, unless of course you aren’t, in fact, a human, but, rather, you are, let’s say…

It’s incredibly tempting to get excited about tide power.

From The New York Times:

EASTPORT, Me. — The fearsome tides that sweep out from the easternmost shores of the United States have for more than 80 years teased engineers and presidents like Franklin D. Roosevelt, who have dreamed of harnessing their force to make electricity.

And next week, a device that looks a bit like an eggbeater turned sideways will be lowered into the water here to catch the energy of the rushing water, spinning a generator that, come September, is scheduled to begin sending power to the grid.

But honestly, the production expected from these turbines isn’t really all that impressive:

The first turbine generator unit has a maximum output of 180 kilowatts, which would power about 30 homes. That is one-sixth the output of a typical wind turbine, although TidGen will turn more than a wind turbine, since the currents will push more consistently than wind.

The company plans to add two more turbine generators. If they survive, they are considering another stretch of water, where the current moves even faster, for an array that could hold up to 18 additional generator units.

And, how much is this costing?

Oh, but Chris Sauer, the chief executive of the company building and eventually operating the facility, is quick to point out:

“Another advantage is, you don’t see a thing,” Mr. Sauer added, speaking to a criticism that has dogged many wind farms.

Which is all well and good, unless of course, as I’ve said, you’re…

It seems all too telling that, in a 1,029-word article, only 36 words mention possible negative impacts:

And officials will have to keep a careful eye on safety concerns, the chief issues being the turbine’s effect on sea life and the possibility that anything dragged by boats could be snagged on it.

I’m reminded of a post I wrote in October 2011, and, in particular, an exchange I had with a reader in the Comments that wrestled with this question of just how eco-friendly is any given solution if it benefits one species while, at the same time, it threatens other species.

The solution in that older post was solar, and the reader, understandably, objected to my suggestion, in the comment I posted just prior to hers, that we cover large unpopulated and largely unvisited, unscenic open spaces with solar panels.

I was thinking of, as one example, the deserts of the American southwest, but the reader was correct, many people do consider them scenic, and they are hardly unpopulated, with all manner of creatures and critters living there, who, despite the harsh conditions, have managed to evolve enough over millions of years in order to survive.

And yet, as I was driving through hundreds of miles of landscape just like this back in June — driving in my air-conditioned, gasoline-burning rental car — the thought still came to me that, in the face of global climate change and the greed, war, and destruction so seemingly inseparable from our ravenous pursuit of finite and rapidly-diminishing natural resources, perhaps the benefits of covering as much of that vast, sun-soaked place as possible with solar panels might outweigh the drawbacks.

Frankly, in the absence of some undiscovered renewable energy source that can truly, realistically replace fossil fuels without harming humans or other life forms on the planet, I’m really not sure about tide turbines that could threaten sea life, or solar farms that could threaten lizards and turkey vultures and such.

We can and should question how we got to this place and whose fault it is, but at some point we have to do something.

7 thoughts on “Tide Power Sounds Great, Unless You’re A Fish”