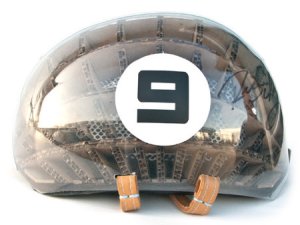 Today’s Stuff We Need installment is a great story.

I mean any story involving bicycles, head injuries, woodpeckers and cardboard HAS to be good, right?

When Anirudha Surabhi was a grad student at the Royal College of Art in London, he was in a bike accident. Even though it was a minor crash, and Surabhi was wearing an expensive helmet, the next day he learned that he had a concussion. He spent three days in the hospital. He wondered why the helmet hadn’t worked—and decided to explore the problem for his thesis project.

It turns out that bike helmets are not as safe as they’re portrayed to be. Over the last few decades, Surabhi says, some helmets have gotten more aerodynamic and better-looking, but they haven’t gotten any better at protecting us from injuries.

As he began working on his design, Surabhi looked at the anatomy of a woodpecker for inspiration. When a woodpecker slams its beak into the trunk of a tree, the impact is cushioned by a special micro-structure between the beak and head. By mirroring that structure—after testing 150 different materials—Surabhi was able to create a helmet that can withstand three times greater impact than a standard helmet.

I’ve often pondered how woodpeckers do what they do! Seriously, the damage to the head and neck, you’d think, would be substantial. (Or, is there just not that much up there in those woodpecker skulls to protect?)

It’s also greener than the ubiquitous polystyrene foam liners. Foam, unsurprisingly, is not great for the environment; the manufacturing process is a health hazard, and it also creates hazardous waste. It’s also more energy-intensive to produce than cardboard. Surabhi used 100 percent recycled cardboard, which he says takes no electricity to produce at all.

VERY exciting that this helmet is already in production, and will be available here in the U.S. next year.

Check out this cool video on Anirudha Surabhi and his awesome design: