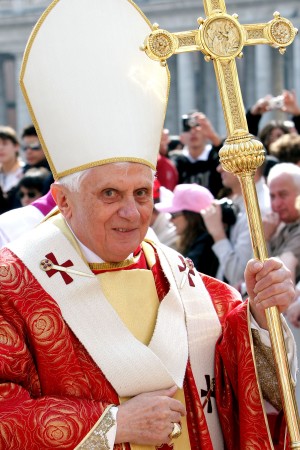 So, the big news this morning is that Pope Benedict XVI has resigned, the headlines are filled with the story, and #pope is trending on Twitter.

No offense intended to Catholics, but all I could think of when I heard the news was the many jokes that will most certainly arise…and sure enough they already have.

As a friend on Facebook posted this morning, “I didn’t realize that you could resign from being Pope.”

And, I didn’t know that either.

Can you imagine that letter of resignation?

Hi. How are you doing? I hope You and Your Son are well, and that neither of You have been hit by that nasty flu going around.

Say, speaking of health, I know I made a pretty big commitment to You, when, upon election, I responded, “Accepto!” But, the thing is, I’m really, really tired. I mean, I’m totally pooped. I’m a totally pooped Pope!

Seriously, do You have any idea how much that big hat and gold cross weigh? I’m exhausted from schlepping those things all over Your green Earth.

That said, I hate to leave You in the lurch. I know there’s a lot going on, with all these gay people getting married and smoking legal marijuana.

So, even though I am badly in need of a very, very long nap, I’ll agree to stay on as Pope until the end of the month. This should be ample time for the College of Cardinals to elect a suitable replacement. (Might I suggest someone significantly younger, preferably an athlete of some kind?)

It’s been a blast serving You, God, and I look forward to hanging out with You in heaven in the not-too-distant future. (I’ll bring some Peroni beer and a pizza from your favorite place in Naples, the one with the red and white checkered table cloths.)

Say hi to Jesus for me!