As someone who has contributed to the birth of a baby and parented said baby for the past 13 years, someone who gets the warm fuzzies whenever he’s around other peoples’ babies, I have to say that this really creeps me out: 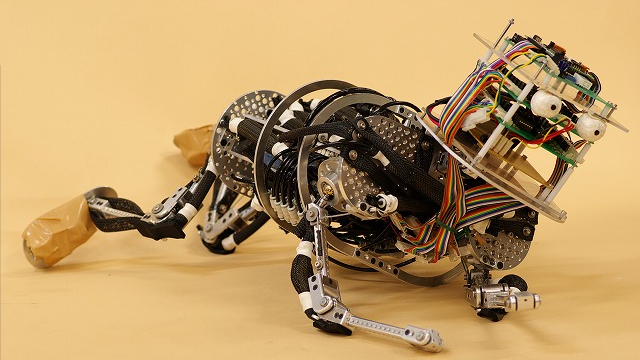 Via Plastic Pals, via Gizmodo:

Osaka University’s Hosoda Lab is presenting Pneuborn-7II and Pneuborn-13, two musculoskeletal infant robots, at ICRA 2011…Measuring the size of a 7 month old infant, Pneuborn-7II was built to study the relationship between motor development and embodiment. It is 80cm (31″) tall, weighs 5.4kg (11.9 lbs), and has 26 degrees of freedom actuated by 19 pneumatic muscles. Notably, the robot’s spine has three pitch and yaw joints that allow it to rotate, flex, and extend. It is fully autonomous, containing a micro controller, battery, air valves, and an air source (compressed C02 cartridge bottle).

Now, I know that there might be many very practical applications for this technology, for the good of the advancement of science. For all I know, these robots could possibly help us learn more about human babies and could very well lead to medical advances.

And yet, I’ve seen too many movies about robots to know what’s really possible. Either it’s some dystopian future, where infertile human couples buy robot babies, deluded that the robots could be a salve for the lonely emptiness in their lives, or alien invaders appear in the form of robotic babies, at first we think they are benevolent, but then they conquer and enslave us, using lasers that shoot out of their eyes.

Oh, believe me, it could happen!