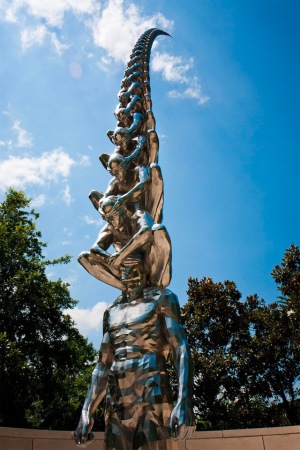 In two previous Eyecatchers posts and one Video Fridays post (Post 1, Post 2, Post 3) I wrote about a fantastic art installation, Cause & Effect, by artist Do Ho Suh that had just been, well, installed here in Bellingham, Washington, on the campus of my employer, Western Washington University (WWU).

Today, I’m excited to discover news of his latest work, via Colossal:

Towering 23 feet (7 meters) into the sky, Karma is a recent sculpture installed in the Sydney and Walda Besthoff Sculpture Garden at the New Orleans Museum of Art by Korean sculptor Do Ho Suh (previously). Captured here in a series of photographs by Alan Teo, the piece depicts a tower of piggy-backed men, each successively covering the eyes of the man below him, creating an illusion that the blinded tower seems to stretch to infinity like a fractal, although technically it was made from 98 cast stainless steel figures.

Once again, Do Ho Suh does NOT disappoint. Karma is stunning and thought-provoking.

…the artwork is a “physical realization of existence, suggesting strength in the presence of numerous individuals. The work is an attempt to decipher the boundaries between a single identity and a larger group, and how the two conditions coexist.”

The artwork at Western metaphorically places the individual within an intricate web of destiny and fate. “It comes from a belief that every individual is spawned from the lives he/she may have lived previously. The vertical context of the figures becomes a collection of past influences, and again, begins to define the inherent powers and energies that characterize an individual,” he said.

Karma is clearly a continuation of these spiritual themes, themes plucked from the Hindu, Jain, Buddhist, and Sikh religions.

Interestingly, as I observed Cause & Effect, both in photos and in person, somehow it didn’t really register with me that each figure is covering the eyes of the figure holding them up.

Now that the motif has been continued in Karma, however, it really jumps out at me, inspiring me to consider the implied meaning, something about how we’re all blind, blinded by illusions, and yet we’re all interdependent, and so, under those conditions, every action we take affects every other living thing and our environment in general, creating a delicate balance, what goes around comes around, and all that, such that, if any one of the figures in Do Ho Suh’s pieces was to upset that balance, it would be disastrous for everyone.

Here are some more photos of Karma. Enjoy! 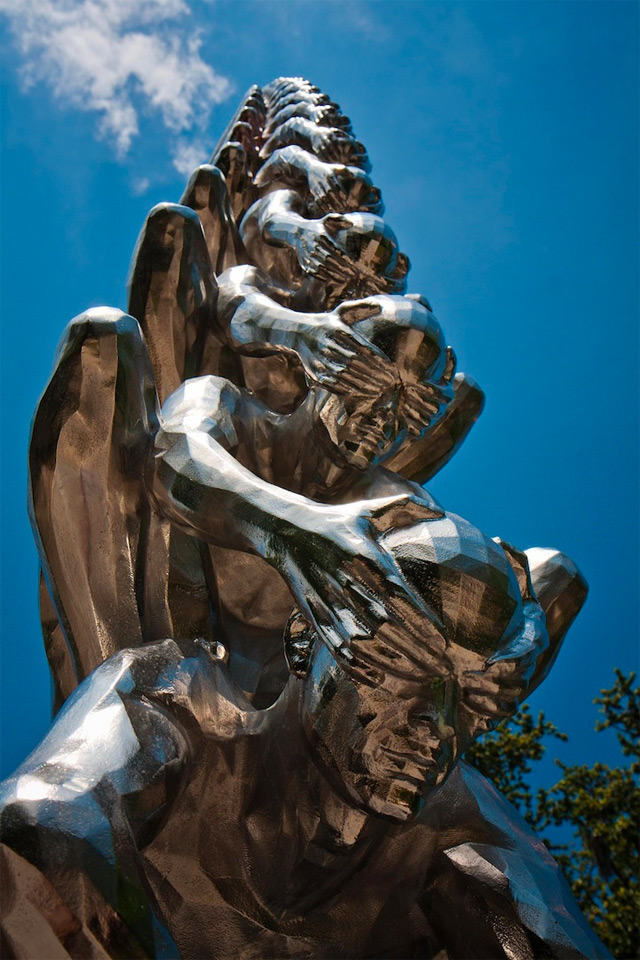 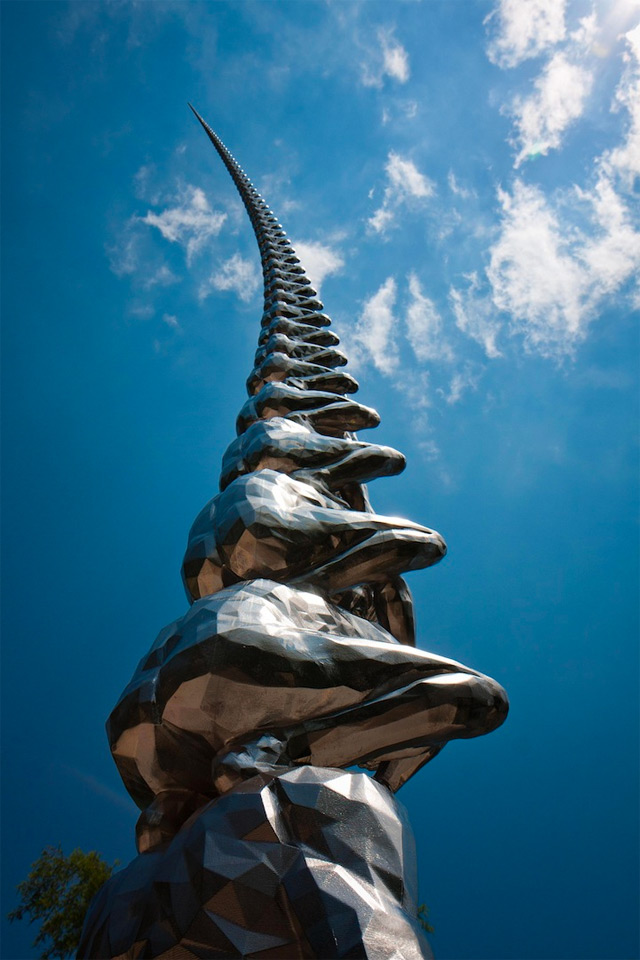 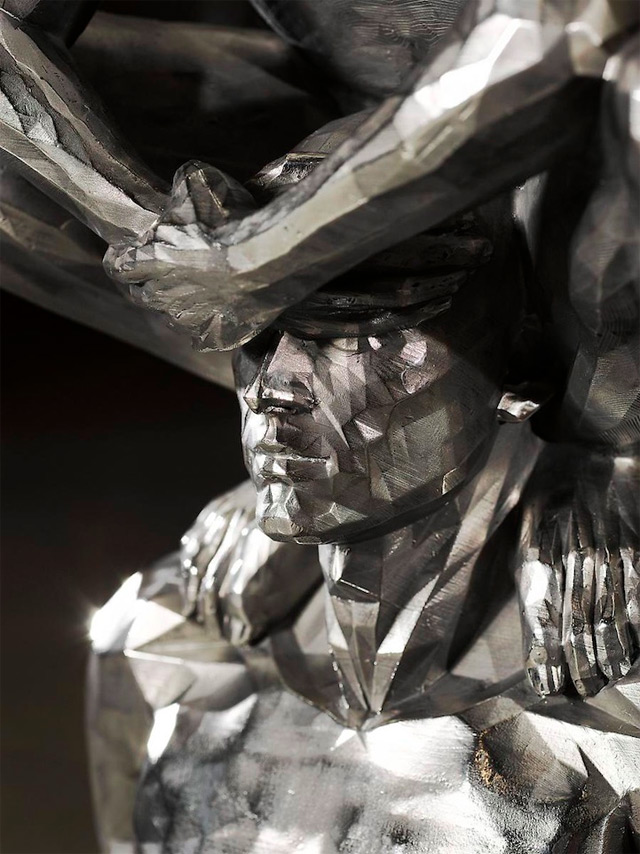 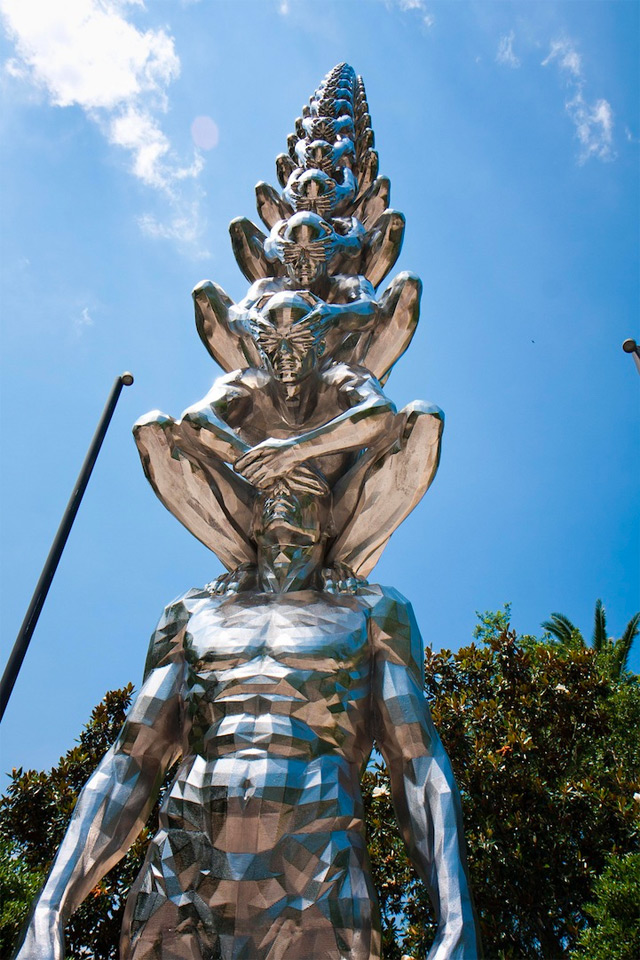 2 thoughts on “Eyecatchers: The Latest From Do Ho Suh”