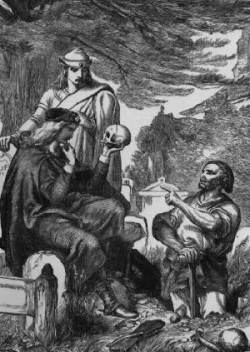 I’ve mentioned several times, here at Fish & Bicycles, that I concentrated in Shakespeare while working on my bachelor’s degree in English, most notably in my October 2011 post concerning the film Anonymous, a fictional exploration of the Oxfordian Theory, which argues that Shakespeare didn’t actually write the works he is so famous for.

All that is to explain that most things Shakespearean usually grab my attention, and today is no exception, as I’ve come across two items on the web, within minutes of each other, both related to Shakespeare’s Hamlet, arguably the Bard’s greatest and most influential play.

First, via a tweet by Studio 360 host Kurt Andersen, an eye-popping and highly entertaining mashup, by Geoff Klock, of 65 very short clips from 65 movies and TV shows, some from actual productions of Hamlet, and others references to or quotes from Hamlet, the latter often from the seemingly most unlikely sources imaginable.

As a former student of Shakespeare, I find the sources of the references and quotes to be particularly fascinating. From Gilligan’s Island to action flicks, from children’s cartoons to The Simpsons, I have to wonder just how many original viewers recognized, much less understood, these.

I suppose the fair and non-cynical thing to say would be that the widespread influence is undeniably impressive, regardless of how much impact these snippets of Shakespeare may have had. So, yeah, I’ll leave it at that and not spoil it by over analyzing.

Next, via McSweeney’s Internet Tendency, John Peck’s hilarious Rosencrantz and Guildenstern and Hall and Oates, a kind of mashup of its own, with just words instead of video.

Here, without any commentary from me, for it needs none, an excerpt:

They are coming to the play; I must be idle:
Get you a place. Where be Ophelia? My own person,
Like the sun, doth daily rise to greet her.

I wouldn’t if I were you,
I know what she can do,
She’s deadly, man, she could really rip your world apart.
Mind over matter, ooh, the beauty is there,
But a beast is in the heart.

We will, my lord.

Watch out boy, she’ll chew you up.

Gods, no! Give me some light: away!

One thought on “Hamlet Mashups: Brevity Is The Soul Of Wit”