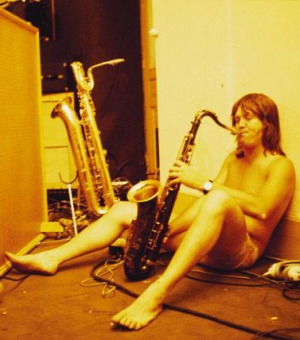 Oh boy. This is a tough loss. Saxophonist extraordinaire Bobby Keys, dead at 70.

If you believe in the magic of rock & roll, which I devoutly do, it isn’t in the individual. I’ve played in bands with A-team players all around. But unless they can play together, it doesn’t do any good. And you can take guys who may not stand on their own up against a bunch of individuals they might be compared to, but you put ’em together, man, and they are unique unto themselves in a way that no one else can touch…That’s part of the music that I come from, cause I can’t read music…That’s not where I come from musically. I come strictly from feeling, and that feeling comes from rock & roll.

That, right there, absolutely nails the essence of rock & roll’s magic; its accessibility, where the door is always open to anyone willing to spill blood, sweat, and tears, where even a bunch of musical misfits can make beautiful music together.

If you’re reading this and don’t really know who Bobby Keys was, first, I’d be sad for you, second, by way of explanation, I’d describe Bobby as an unsung rock & roll legend.

And, while most who do know and love his music associate him first and foremost with The Rolling Stones, for good reason — he recorded and performed with them off and on for over 40 years — the list of musical artists he collaborated with is like a Rock & Roll Hall of Fame roll call: Bobby Vee, Buddy Holly, Dion, Elvis Presley, Chuck Berry, all four Beatles, Marvin Gaye, Donovan, Eric Clapton, Delaney & Bonnie, Harry Nilsson, Faces, The Who, Humble Pie, Dr. John, Lynyrd Skynyrd, Warren Zevon, etc.

That said, I most closely associate Bobby Keys with his work on my all-time favorite live album, and the film for which it was the soundtrack, Joe Cocker’s Mad Dogs & Englishmen. It’s a testament to his greatness that he stood out the way he did in that massive, and massively talented, 20-member band. (If you aren’t familiar with Mad Dogs & Englishmen, run, don’t walk, watch the movie and listen to the album!)

In that spirit, since just one video would not be tribute enough, I’ll start off with a clip from Mad Dogs & Englishmen, and I’ll end with a Stones classic.

Thanks for all the great music, Bobby! You’ll be missed!