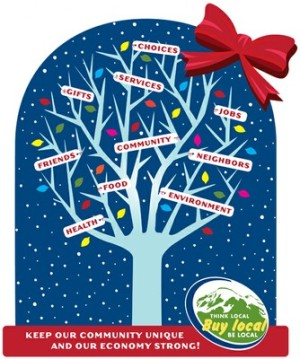 I’ve mentioned here several times over the years how much I appreciate my adopted hometown of Bellingham, Washington, for its deep commitment to a local living economy, this idea that the whole community benefits when we choose to support locally-owned businesses. It’s more than a slogan here, as evident by the fact that we have so many local businesses that are thriving.

This wasn’t always the case.

When I first moved to Bellingham in 1993, the downtown area west of Interstate 5 was practically a ghost town. A once-thriving commercial district, in 1988 it was nearly abandoned by businesses, including critical anchor department stores J.C. Penny, Sears, and The Bon Marché (now Macy’s), when the Bellis Fair Mall opened on the other side of I-5, followed by the usual suspect national “big box” chain stores along the same stretch of road, heading north, away from downtown, a road known as the Guide Meridian.

Slowly but surely, however, an unlikely and wonderful thing started to happen.

Today, not only is downtown Bellingham thriving thanks to local businesses, but our second largest commercial area west of the freeway, the Historic Fairhaven District, consists almost entirely of locally-owned. In fact, with the exception of a couple of gas stations and banks, the only non-local businesses I can think of downtown and in Fairhaven are Starbucks and Taco Del Mar, and both are headquartered just 90 miles south in Seattle.

Again, this can only happen with a community commitment, whereby some community members choose to invest in starting up businesses, and the rest of the community invests in supporting those businesses.

So, wherever you are, supporting your locally-owned businesses just makes sense on SO many levels. Give it a try!

And, to drive this message home, here’s a fantastic infographic courtesy of Advocates for Independent Business: