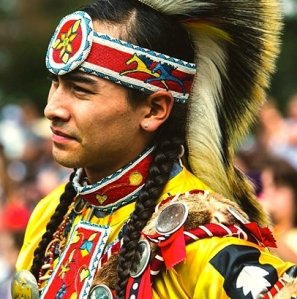 He shares the same name as my one and only son.

And, his middle name, well, it couldn’t be more appropriate.

His name is Julian Brave NoiseCat, he’s a member of the Canim Lake Band of Secwepemc (Shuswap) Nation of central British Columbia, Canada, and his personal account, posted at Salon, of his efforts to earn a Rhodes Scholarship is just about the most inspiring and moving thing I’ve read lately.

The Rhodes scholarship wasn’t designed or intended for me or my people, and that’s why I wanted it so badly.

I spent months pouring my heart and soul into becoming a Rhodes scholar.

As the grandson of multiple generations of genocide survivors (who endured everything from the Cariboo Gold Rush to the scandal of Native American residential schools), and the only begotten child of a broken interracial marriage between a spunky Irish-Jew and an alcoholic artist who stumbled off the reserve and into a New York bar, I recognize the irony here.

The Rhodes is funded by the estate of Cecil Rhodes, a decidedly terrible man who profited unequivocally from the colonization and exploitation of African peoples and territories. A proud imperialist, Rhodes believed that the burden of both history and progress belonged to the Anglo-Saxon who must strive to triumph over the savagery of the “ape, bushman and pigmy.” Although Rhodes’ explicit endorsement of global white supremacy is noted only in hushed tones and seldom in polite company, the spirit of his vision — to find and enable the most elite talent among the young and educated so that they can lead a righteous crusade forward for humanity — remains. Every year, a short list of scholars from around the world shoulder what was formerly known as the “White Man’s Burden.” Fortunately, these days, it is a bit browner and more feminine than Rhodes originally envisioned.

…Long ago, men like Rhodes — who amassed fortunes from actions that included the theft of the lands where our gods reside, our ancestors are buried and our people still struggle to live a decent life — decided that humans were players in a zero-sum game and that the resources and opportunities would not be ours but theirs. I imagined that when I won the Rhodes and raided his colonial estate, those men would turn in their graves while my ancestors danced in the revelry of vengeful success. I was going to take it all back — for Canim Lake (my home reserve), Oakland (where I grew up) and all of Indian Country. Maybe it was justice. Maybe it was delusion.

I highly recommend reading the entire piece, but if you do so, you may question why I used the term “inspiring” to describe it.

After all, (spoiler alert) while having been selected as one of 15 finalists in his region, only two were offered the scholarship, and Julian was not one of those two. What’s worse, he had to endure a horrendously out of touch, insensitive, and subtly racist inquisition by a member of the selection committee.

So, how can something so heartbreaking be inspiring?

Because Julian decided to pursue the scholarship despite its namesake’s past.

Because, though the Rhodes has been awarded to women and people of color in the past, even an Aboriginal Australian, no member of the Canadian First Nations or U.S. Native American tribes has, and Julian decided he could be the first.

Because Julian’s efforts offer inspiration to indigenous students all over the world.

Because Julian shared something his late grandfather used say — Shake the hand that shakes the world — and he proceeds to describe how he did just that, and he concludes his story with his own undaunted spin on it:

When you shake the hand that shakes the world, look that power in the face and do not tremble.