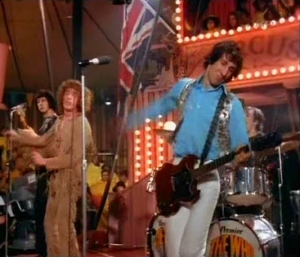 Back in March 2011, I posted a video clip from the legendary 1968 Rolling Stones Rock & Roll Circus film, not a clip of the Stones themselves, but of The Who, performing their song A Quick One (While He’s Away).

Legend has it that the film was intended to be aired on BBC television, but that the Rolling Stones refused to let it air because The Who upstaged them with their amazing performance. (Another, more realistic, version of the story is that the Stones were unhappy with their performance due to the fact that massive delays during the filming resulted in their not playing until 5:00am, after having been up all night assisting in the production of the other performances, and indeed their exhaustion shows in the film, which was finally released in 1996.)

Anyway, my March 2011 post described this version of The Who’s A Quick One as quite possibly the greatest live Rock&Roll performance ever, and I’m still prepared to stand by that assertion.

Given that high praise, you can imagine my skepticism when I saw a tweet on Twitter today from Pearl Jam, which included a link to a YouTube video of their frontman, Eddie Vedder, performing A Quick One with My Morning Jacket, from a 2006 concert.

As it turns out, though, it’s a great, great rendition of a song that I didn’t think anyone could pull off.

That said, it is absolutely stunning to consider this: Whereas My Morning Jacket employs two electric guitars, bass, keyboards and drums to recreate this classic song, The Who made it a classic using only one guitar, one bass, and one drummer.

Judge for yourself, if you will. Here’s the tweet, the Vedder & My Morning Jacket performance, and finally The Who.