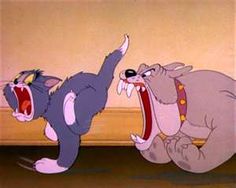 From 1984’s comedy classic, Ghostbusters (my emphasis added in bold in the last line of dialogue):

Peter Venkman: Well, you can believe Mr. Pecker…
Walter Peck: My name is “Peck.”
Venkman: Or you could accept the fact that this city is headed for a disaster of biblical proportions.
Mayor: What do you mean, “biblical”?
Ray Stantz: What he means is Old Testament, Mr. Mayor, real wrath-of-God type stuff!
Venkman: Exactly.
Stantz: Fire and brimstone coming down from the skies! Rivers and seas boiling!
Spengler: Forty years of darkness! Earthquakes, volcanoes!
Winston Zeddemore: The dead rising from the grave!
Venkman: Human sacrifice! Dogs and cats, living together! Mass hysteria!

That the idea of cats and dogs living together in peace should be included in a list of biblical-scale events works as the punchline of this joke, because it’s so tame compared to the other items listed. And yet, it speaks to the endurance of the stereotype that cats and dogs are natural enemies. 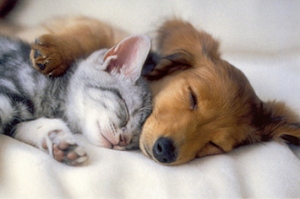 Meanwhile, anyone who spends nearly any amount of time on the interwebs or watches any number of home video TV shows is familiar with the near-ubiquitous photos and videos featuring animals from different species — in some cases species known to have a predator-prey relationship in the wild, or would likely be enemies if they shared the same habitat — interacting playfully, or even, though some might call it anthropomorphizing, lovingly.

I have to admit, while I’m a true lover of animals, I’m not someone who goes all gushy over them, regularly browsing cute animal photos and videos on the web, using puppy or kitten photos as the desktop background on my computer, etc.

And yet, the videos that feature friendly interspecies interactions do grab my attention and move something deep inside me, and I suspect the same thing happens for millions of people, even, perhaps, some hardcore cynics. I’m sure there are some who would rather suggest that these are nothing more than the result of artificial domestication, but I suspect that this is a slim minority, judging by how often these videos go viral.

Given that we live in a world perpetually wrought with human conflict, often horrific and deadly human conflict, it’s easy to despair, to conclude that there will never be lasting peace. 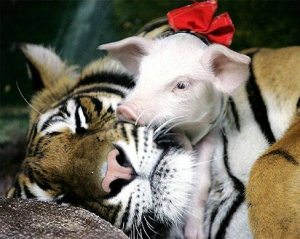 Under these conditions, how can we not be moved when we see a cat and a dog peacefully snuggled together, as in the above photo, or, let’s say, a tiger and a piglet doing the same? And even if the two species interacting aren’t known or likely enemies, many of the pairings appear surprising and unlikely and serve as powerful symbols of harmony and hope in the face of differences.

Given that we live in a world perpetually wrought with human conflict, we are drawn to, and I’d even say we need, these images of animal harmony and hope, to keep us from despair. In fact, our biochemistry helps us benefit from these images. Human brains produce a hormone called oxytocin, sometimes referred to as the “love hormone”, because it’s released when we experience love and joy, and it’s been proven that we produce oxytocin when we observe baby humans and cute animals.

I could go on and on with this topic, perhaps by bringing the spiritual component to the topic, for instance how Buddhism, which I dabble with, teaches the value of cultivating harmony with all living things, but I think you get the point.

So, even if you think these interspecies friendship videos are a bit cheeseball, try to let go of your initial resistance, allow yourself to notice the sweetness, to consider the far-reaching implications of the fact that our brains allow us to experience feelings akin to love when we see such sweetness, try to extrapolate how this sweetness could possibly melt away human-to-human and human-to-animal conflicts.

Start now, watch this brief yet powerful video of a monkey affectionately interacting with a litter of puppies, notice how gentle the monkey is with these fragile, practically newborn pups, notice the monkey’s fingers lightly stroking the puppies, truly caring regardless of the fact that these creatures must seem incredibly different and strange.