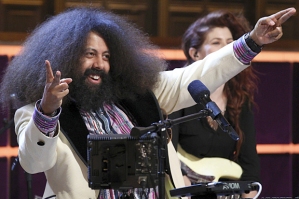 This morning I posted this week’s Video Fridays installment, in which I touched on the late night TV talk show Host, Bandleader, and Sidekick roles, in response to the announcement yesterday that Jon Batiste will be Stephen Colbert’s bandleader on the new Late Show, coming this September.

My post was never meant to be an exhaustive exposé on the subject, and so my references to late night TV talk shows were far from inclusive, leaving out two shows in particular: Jimmy Kimmel Live! and The Late Late Show.

In my post, I mentioned that some late night shows have a bandleader AND a sidekick, while on others the bandleader doubles as the sidekick, and by coincidence, shortly after I posted that, I came across a piece on Salon.com this morning with the headline:

Reggie Watts, the weirdest guy on late night TV: How “The Late Late Show” bandleader is redefining the sidekick role

If you aren’t familiar with Reggie Watts, it is well worth your time to go on a YouTube binge, or check out back episodes from the show Reggie is leaving, Comedy Bang! Bang!, seasons 1-3 of which are now on Netflix.

And, since it’s still Video Fridays, and since we’re on the subject of late night TV talk shows, here’s a clip of Reggie doing his thing on Conan: