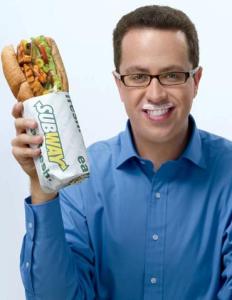 Whether it’s white privilege, our country’s soft-on-white-collar-crime tendencies, or something else entirely, in all my years of reading the news I’ve never seen anything like the softball coverage of the FBI raid on the home of now-former Subway spokesman Jared Fogle.

Oh, it starts off alright, getting directly to what you’d think the point would and should be:

NEW YORK — Subway said Tuesday it mutually agreed with Jared Fogle to suspend their relationship after the home of the chain’s longtime pitchman was raided by federal and state investigators.

But then…the article continues for another 730 words over 19 more paragraphs reading more like a Wikipedia entry on the history of the Jared-Subway ad campaign, never mentioning the FBI — much less mentioning that the raid was tied to a child pornography investigation — until paragraph 18!

It goes from that appropriate opening paragraph right into:

The separation was jarring because the 37-year-old everyman has become a familiar face around the world. To many, he’s known simply as “the Subway guy” who shed a massive amount of weight by eating the chain’s sandwiches. His story is perhaps the biggest reason for Subway’s image over the years as a healthy place to eat.

“That story played a huge role in (Subway’s) growth,” said Mary Chapman, senior director of product innovation at Technomic, a market research firm. “It’s not just Jared the man, it’s what it represents.”

See, there’s something terribly wrong when a celebrity receives this kind of treatment, while ordinary John & Jane Doe will simply be reported as suspects in a child pornography ring and appropriately scrutinized by investigative journalists who recognize that child pornography, not “play[ing] a huge role” in the growth of a corporation, is the actual story.

Yes, I’m talking to you, Associated Press, source of the article quoted above, and you, Washington Post, with your article titled:

…and you, Los Angeles Times, with yours, titled:

The Subway guy: How Jared Fogle went from overweight student to cultural icon

…as if there weren’t any possibility that the title of the story might actually end up being:

The Subway guy: How Jared Fogle went from overweight student to cultural icon to child pornographer

Of course, very few details are known at this time, but instead of holding off reporting further until more information is available, there are all of those column inches to fill!