When I first heard my 17-year old son refer to some guy’s hairstyle as a “man bun”, I chuckled heartily.

Little did I know at the time just how much of a thing man buns are!

See, I’ve lived here in Bellingham, Washington for 22 years, and there has always been a visible, healthy, active, engaged hippie presence in town. Since the late 1960s, men with long hair, tied up or flowing freely, have been decidedly commonplace, and so modern hipster culture‘s embrace of long hair, and the man bun in particular, just didn’t register for me.

Well now, thanks to an article at Vox titled Man buns, explained, posted by a friend on Facebook today, I know much more about this trendy-once-again hairstyle than I thought I needed to know, including the names of some of the many man bun variants:

Interesting timing, all this, because I just got a haircut, my hair had reached a length that could very nearly support a man bun if I was so inclined, and yet I have a very complicated relationship with my hair, it’s a hair paradox, really.

I’m the type of person who prefers a low-maintenance appearance, partly based in an effort to avoid vanity, and partly out of simple laziness. I like to spend as little time as possible looking at myself in the mirror, fussing with clothes and hair and such. I’ve got MUCH more important things to spend my time on!

And yet, my hair is a major pain in the ass. It’s incredibly thick, curly, and dry and frizzy. It’s easiest to simply towel dry and forget about it when it is very short, but it grows so damned fast that I’d have to get a haircut every other week to keep it that easy, and yet, paradoxically, bi-weekly haircuts are not low-maintenance at all!

Conversely, if frequent haircuts are too much maintenance, you could argue that another solution is to just let the hair keep growing and eventually tie it up into a ponytail or, I don’t know, let’s say, a man bun, and forget about it.

Only, with hair like mine, the longer it gets the more work it takes to tame it: more shampoo to get it clean, more conditioner to keep if from being ridiculously frizzy, more time painfully running a brush through it to get out all of those insidious knots, cuz no offense to Rastafarians everywhere, but I ain’t doing dreadlocks.

Conclusion: Even if I was a hipster, which I’m decidedly not, and may be too old to try to be with any self-respect, (See the recent Noah Baumbach film While We’re Young), the answer to the question “To Man Bun, Or Not To Man Bun?” is clearly: Not. 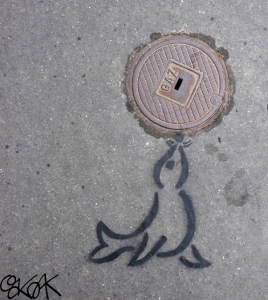 Hey, everyone! Fish & Bicycles is back on the air after a particularly busy period paying the bills, so to speak.

So, let’s kick things off with an Eyecatchers installment, featuring the Street Art (a favorite genre of mine) of French artist Oakoak.

I stumbled upon Oakoak via a photo gallery at The Guardian, and I’m so glad that I did. His work ingeniously adds painted, stenciled, or pasted images and other materials to existing urban elements, such as the manhole cover in the first photo here, resulting in clever compositions, in a humorous vein.

Oakoak is quoted by The Guardian, describing his work thusly:

What I like about street art is that you can find somewhere to draw anywhere and it is a surprise for the people who find it. Any wall can be a canvas.

He really has a great eye!

Below are some of my favorites, but please do take the time to view the whole gallery at The Guardian, and even more of his work at his website. 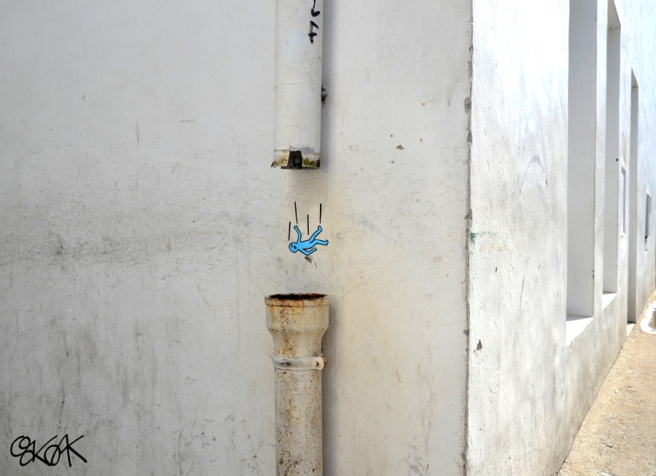 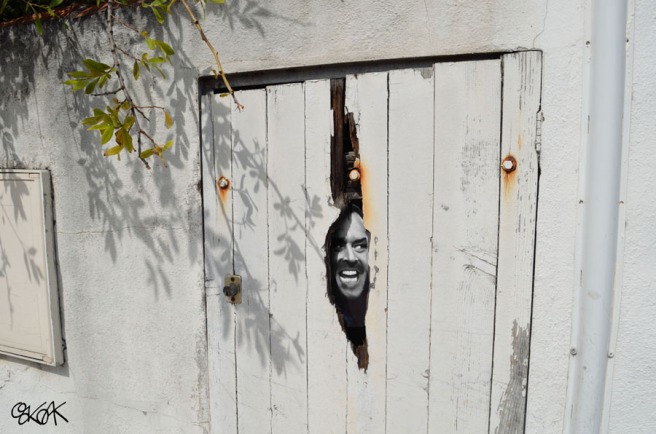 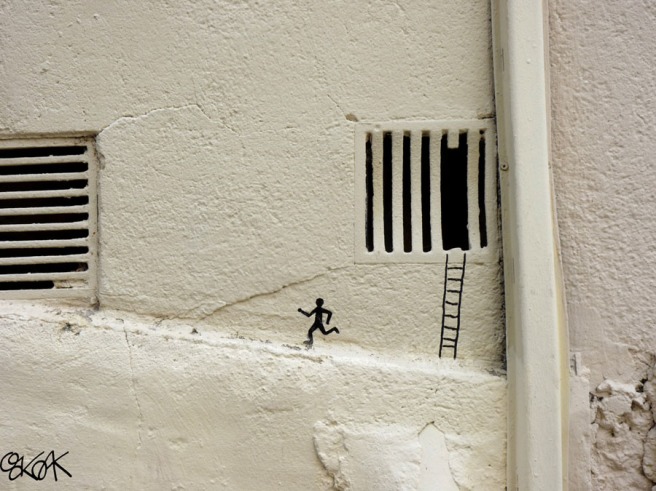 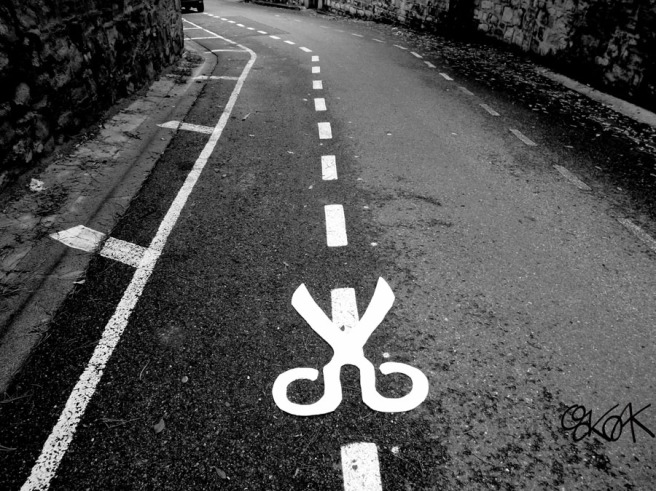 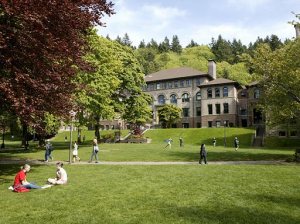 Almost exactly five years ago, I wrote a post titled Fish & Bicycles: Property Of The State, explaining that, because I work at a public university, with the impending start of fall term and the academic year, my ass is essentially owned by the State of Washington at this time, resulting in little-to-zero time or energy for blogging.

This will be my 8th year in my current position, my 15th year over all at the university, each year I make a concerted effort to improve my process and outcomes, however small the increment(s) may be, and this year I seem to be particularly inspired to make it a great kickoff, partly evident by the fact that I’m posting this disclaimer for the slowdown here at Fish & Bicycles a full 10 days earlier than I did 5 years ago.

Obviously, it would be hypocritical of me if I carried on any further in this post. I have a million things on my to-do list, after all.

So, instead of writing anything else today, I thought I’d stop here and simply copy and paste below the post from five years ago. As was the case then, I may be inspired and able to post a thing or two in the next few weeks, but I can’t guarantee anything.

Happy Weekend, everyone, and hope to “see” you soon!

I’m sorry to report that for the next week or so it’s likely to be awfully quiet around here.

You see, as I’ve mentioned before, I work for Western Washington University, in fact, my office is in the building you see highlighted in the photo here.

The first day of classes for Fall Quarter is September 22nd, but more important to me, 4,000+ students who will be living in on-campus housing move in this coming weekend, and I’m basically owned for the next week or so.

If this weren’t enough excitement, this past Sunday a main power switch on campus failed, sending 12,000 volts in an arc across a room, causing melting through plated steel, requiring replacement parts to be manufactured in Portland and hand delivered by the manufacturer. As a result, since Sunday there’s been a power outage in most of the buildings you see in the foreground of the photo, causing hundreds of WWU employees to have to find alternate workstations to do their…um…work.

I’m accustomed to being mobile, as my job has me regularly splitting my time between various buildings, using a laptop and a cell phone to get stuff done just about anywhere. For a lot of other folks that isn’t the case. And even though people are pulling together to help one another, as it happens so often in times of adversity, there is a palpable tension in the air, and the oft-repeated phrase “at least this didn’t happen next Monday” brings little solace.

So, who knows? I might be able to squeeze a little time in here and there to post something new to Fish & Bicycles, but I appreciate your patience and your checking back in later if that proves impossible.

Now, where did I put that flashlight?