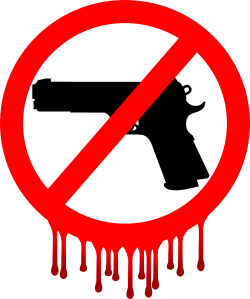 You know that old saying, used frequently as a metaphor for entering into a situation inadequately equipped or prepared?

Well, consider this example of the opposite scenario:

So, this past weekend, my wife and I and our dog Zuki were at the dog park at nearby Lake Padden, nestled amongst gorgeous frost-covered trees at the south end of the lake, the dogs were playfully sniffing and chasing each other around, it was so peaceful…

… in a holster on the hip of a guy dressed all in black, with a U.S. flag patch on one of the upper sleeves of his jacket, the owner of a Great Dane twice the size of all the other dogs in the park …

… and my brain tried to make sense of the cognitive dissonance.

I tried to imagine just how awful it must be to live in so much fear that you feel you have to bring a gun to a dog park.

But, then I thought of the epidemic of mass shootings in the U.S., and how some people think that there would be fewer mass shootings if more people were armed, because, they say, there would be more of a chance of someone being at the scene who could shoot and kill the shooter before he kills or before he kills many, even though there’s no evidence that this is true.

And then I thought, even if this guy was somehow motivated by a warped, misguided sense of civic duty, a desire to protect others, nevertheless, his mere presence and the deadly weapon he carried literally terrorized me, AND he’s allowed, by law, to do so, in my otherwise great home state of Washington, without a license or permit.

And finally, I realized that the other people in the U.S. who are legally allowed to carry guns are police, and the only reason I don’t feel terrorized by their presence is because I’m a white male.

Is this really the land of the free?