Jeb spent $130 million + the millions spent by all of the eventual losers = a shameful waste. https://t.co/MirabLxuSW

Just a quick update on my Out of Office post from last Thursday.

I’ve kinda had second thoughts about taking a complete break from blogging, and have decided, instead, to keep one foot in the online publishing world using Twitter.

My plan now is to use only Twitter for a while and post my tweets to the blog.

I have no idea whether or not this idea will work out, but it feels better than having Fish & Bicycles go completely silent indefinitely.

It’s been a longstanding tradition of mine, here at Fish & Bicycles, to announce when I will be unable to post for a while.

This series of Out of Office posts has spanned the last five years, they usually marked occasions when I was traveling, but sometimes I just knew I’d be too busy to blog during the winter holidays or other life events.

THIS, is not one of those occasions.

Though I actually am leaving tomorrow for Kaua’i, and will not be home until March 1st, the real catalyst for this post is the fact that my muse, who has been by my side as a writer for many years, with just one disappearing act from June 2013 to November 2014, has been completely and utterly occupied by a different creative pursuit of mine…

My muse isn’t very good at multitasking, and as my latest music project started to get serious, right around the beginning of this year, very little inspiration for writing has come my way.

The only place I’ve consistently found my muse lately has been here: 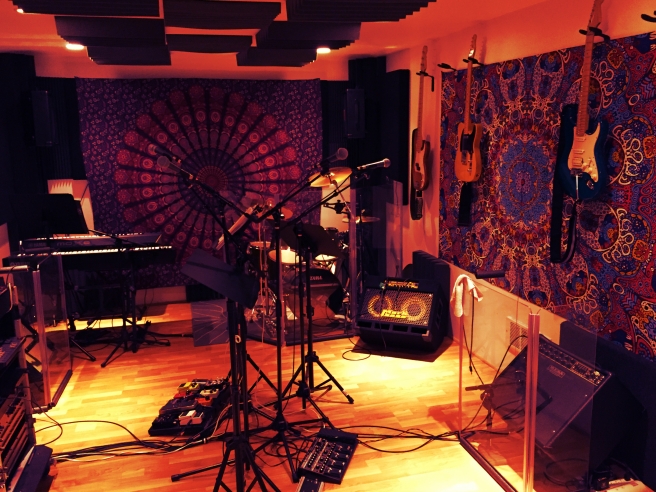 I’m super fortunate to be playing with a group of musicians of the highest caliber, in a studio like this, making the most complex music I’ve ever attempted to play.

One of the founding principles of this band was that we are all treating it as an opportunity to learn and grow as musicians; no small task when you consider that, except for our 20-something keyboard player, we’re all over the age of 50, hence lots of new tricks for old dogs.

But, considering that there is growing scientific evidence that making music can help stave off dementia, this is probably the very best thing that I can be doing for myself right now.

A friend of mine who shares with me a love for the music of the Grateful Dead, just tonight sent me a link to a YouTube clip featuring Jerry Garcia telling a story about a time when he had to play a concert after he had accidentally been dosed with LSD. Jerry explains that he got very paranoid before he had to go on stage, thinking there were mafia gangsters in the crowd who might want to kill him, especially if he went out there and couldn’t play because he was tripping on acid.

And so, in order to get through the situation, Jerry said to himself, “I’ll play for my life.” It worked, and it became a kind of mantra for other times in his life when he felt, musically, in a tight spot.

I relate to that, in numerous ways. Making music feels to me as if I AM playing for my life, not thinking that someone will kill me if I don’t play well, but because making music gives me life, sustains me, makes life worth living, makes life MUCH more fun.

SO … I’m not really sure when my muse will steer me back to writing, but Fish & Bicycles means much too much to me to give it up.

Most likely, after I have focused on music for a while, once the band has fully gelled, once we’ve been through the learning curve for the 30-40 songs we’re working on, maybe then some of my brain capacity will be freed up, and my muse will sense this available creative resource, and the inspiration to put words together in hopefully compelling ways will return.

Until then, thanks so much to any and all of my readers out there. If you’re subscribed, or follow me on Facebook, Twitter, etc., you’ll see me again when you see me.

After my depressing post this morning, I thought I’d lighten things up, WAY up, with this sweet clip from last night’s The Late Show with Stephen Colbert for this week’s Video Fridays installment.

I’ve been a HUGE fan of Jeff Tweedy, since his days in Uncle Tupelo, through his over 20 years in Wilco, and through his various side projects, which I’ve mentioned in multiple posts over the years here at Fish & Bicycles, and one of the many things that I like about him is that his soft, vulnerable side has been a major recurring element in his music, making him and his music eminently relatable.

Even though these are two grown men in this video clip, I couldn’t help thinking back to when I used to read stories and sing to my son, now 18-years old, at bedtime.

Having an 18-year old is a grieving process, their time living at home with you is winding down, nest departure is inevitable and nearing day by day. We may want them to stay until it’s two grown men doing bedtime together, but that’s just not the way the world works.

I’ve written a number of posts in response to the gun violence problem in this country, mostly expressing my dismay and outrage that our government has done little to nothing to address the problem, while thousands die every year.

Thankfully, my life has not been directly touched by gun violence. No one I know has been a victim of a shooting. But I abhor violence of all kinds, and I feel genuine pain and sadness with every death reported in the media and at the thought of the thousands that I never hear a thing about.

And all the while I find it unconscionable that nothing is being done about this.

Over the same period, namely the past few years, another trend was going on that I didn’t see as connected … until this week.

While no one I know has been a victim of gun violence, over the past few years an increasing number of people I know, as well as people I have admired and have been inspired by from afar, have been diagnosed with and/or have died from …

In the past few months alone I have simply lost count. Cancer feels closer to me than ever before, even though I lost my mother to the disease years ago, and even though I’m a survivor myself, of a rare and not terribly dangerous deep tissue skin cancer, diagnosed and treated in 2001, and cancer-free ever since.

It seems that every other day I hear of someone else battling or losing the battle with cancer. Just this past weekend I visited a dear friend in the hospital who has been through unimaginable hell during his treatment.

And today, the thought suddenly occurred to me:

If I’m outraged by the lack of action from our government on gun violence, what about our government’s efforts to address the cancer epidemic, which kills MANY more people per year than guns?

Looking at the $5.21 billion annual budget for the National Cancer Institute — the U.S. federal cancer research organization — it might seem like our government is doing a heckuva lot.

BUT, when you consider that the U.S. government spends over 100 TIMES THAT ($599 billion) on the military, with over 10 TIMES the cancer budget alone ($64 billion) spent specifically on our new-normal perpetual war, and if you consider that another national and international crisis needing urgent attention, climate change, only gets $21 billion…

… well, that’s a clear case of fucked up national priorities.