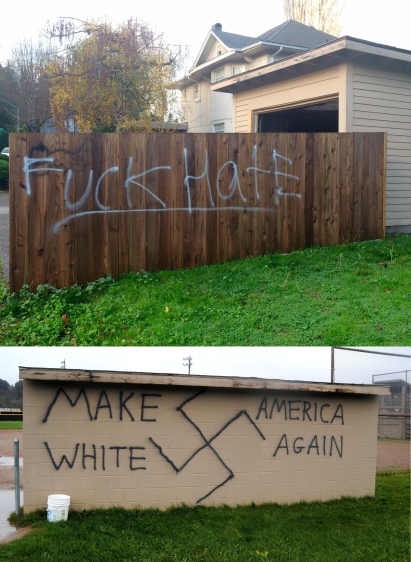 So, the photo on top, shot by me, is from right here in Bellingham, Washington, the other photo is from all the way across the country in Wellsville, New York, both of them post-election reactions to the outcome.

Do I really need to point out the cognitive dissonance?

Meanwhile, my Facebook feed, and by extension the interwebs in general, are filled with anger and finger-pointing and argument.

Take a step back from it all, view it from a distance, and it’s not really surprising. It’s a microcosm of our divided country.

But, as President Obama said in his first post-election remarks:

That’s the way politics works sometimes. We try really hard to persuade people that we’re right and then people vote. And then if we lose, we learn from our mistakes, we do some reflection, we lick our wounds, we brush ourselves off, we get back in the arena, we go at it. We try even harder the next time.

In a similar vein, when asked about this topic, Zen Buddhist teacher Norman Fischer says:

It’s OK to freak out, grieve, and vent for a while. Hold each others’ hands. Then we can get back to work, as always, for the good.

Think of what the Dalai Lama has gone through in his lifetime. He maintains daily practice, he maintains kindness for everyone, though he has lost his country and his culture at the hands of a brutal regime. Yet he doesn’t hate the Chinese and finds redeeming features in them. He maintains his sense of humor. He has turned his tragedy into a teaching for the world.

Lets do the same.

It’s not useful and it’s needlessly dismissive to deny anyone’s right to be angry.

But it IS useful and even critical for liberals/progressives to be told gently that it’s best to channel the energy from that anger into determined, assertive, sustained non-violent action.