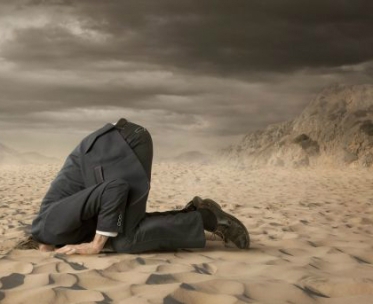 Hiding Your Head In The Sand

It’s a saying that always has a negative connotation.

Literally speaking, there is some logic to that assessment. After all, when your head is in the sand your butt is in the air, highly vulnerable, and you are unable to see any threats coming your way.

And yet … I believe that the impulse to hide one’s head in the sand resides in a precious moment of righteous self-preservation, a moment when one reaches the saturation point, unable to take in one more portion of “real world” shit, no matter how wafer-thin.

Example: I’m driving my car, I have six presets on the radio, several of them are NPR stations, two air Democracy Now!, and all of them, during commute times, broadcast news/talk programs. Invariably, before I get halfway through my drive I’ve heard so many horrors that I can’t switch to music on my CD player, or from my phone via Bluetooth, fast enough.

I contend that at that precise moment I am most in tune with reality, aware that all of those horrors are an insult to reality, a violation of reality, the reality that all people, all beings, the planet, and the universe are all one and interdependent, that the optimal state, then, is one of mutual respect, cooperation, and preservation.

Besides simple silence — also a good remedy — music works reliably well for me as protection from all that does not earn the label “real”. As a musician myself, I know what it takes to make music, even more, what it takes to make good music, and good music is the product of a desire to make something beautiful, beautiful in that artistic sense, beauty that can sometimes include ugliness, but an ugliness made pure and valid as an expression of the human experience.

Anyway, I’m feeling this whole topic quite acutely today, feeling the need for music right now more urgently than normal, and making a selection for this installment of Video Fridays was very easy because I’ve been on a serious R.E.M. binge lately, during which I rediscovered and reveled over a YouTube treasure, an entire show from 1985, via the amazing German television show Rockpalast, from the European tour for one of my favorite of their early albums, Fables of the Reconstruction.

Watching and listening to this makes me feel good on SO many levels, though it does induce a powerful, potentially unfulfillable longing for a 12-string Rickenbacker.

Enjoy, and Happy Weekend, everyone!