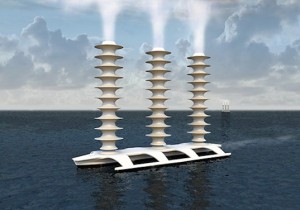 I guess this is what happens when the second wealthiest man in the world was born, raised, and still lives in Seattle.

The Microsoft founder recently announced plans to invest $300,000 into research for machines that suck up seawater and spray it into the air, seeding white clouds that reflect rays of sunlight away from Earth.

The machines, developed by a San Francisco-based research group called Silver Lining, turn seawater into tiny particles that can be shot up over 3,000 feet in the air. The particles increase the density of clouds by increasing the amount of nuclei contained within. Silver Lining’s floating machines can suck up ten tons of water per second.

Of course it seems ok to a multi-billionaire Seattleite to add more clouds to the sky!

Listen, I know that the situation is dire and that a lot more needs to be done to combat global warming, but this idea seems crazy to me, and I’m sure that tourism bureaus all across the planet would be none too happy with it either.

But the most troubling thing to me is the bit about sucking up ten tons of seawater per second from the oceans. Am I crazy or is that bound to have a disastrous impact on fish and sea mammals? Isn’t this idea supposed to protect our planet from harm?

Listen, everyone who knows me knows that I LOVE Boundary Bay Brewery. I love the beer, the ambiance, the clientèle, and the food’s not too shabby either.

That said, I’m no Boundary Bay sycophant. I don’t like all of their beers, and I don’t like their policy of serving select seasonal beers in smaller glasses for the same price as a pint.

Oh, and I can attest that this beer, which I tried last year, is terrible:

A spicy yet refreshing beer for Cinco De Mayo. A light bodied ale spiked with roasted Anaheim, Jalapeno and Serrano peppers. It’s not as hot as it sounds because the roasting takes away some of the heat but leaves all the flavor. Try some with your favorite dish. Salud!

Some things were simply not meant to go together: …um…I mean: bicycle tires and broken glass, bare feet and dog poo, marinara sauce and white shirts, and…

…chili and beer. Chili-laden Mexican food is great when washed down with beer, but the flavors do NOT belong in the same glass.

Then again, that’s just me. If for some crazy reason you want to judge for yourself, by all means, go check it out why it’s available.

In the meantime, order me an Imperial Oatmeal Stout.

Last week I introduced a new series I’ll be running here at Fish & Bicycles, a little thing I’ve titled Stuff We Don’t Need (aka SWDN). And in that introductory post, I described items that could be featured in this series like this:

…a thing can be simultaneously utterly pointless and funny at the same time.

Since this is such a new idea, it’s not surprising that I’ve come to find so soon that I need to revise that description. While any given SWDN item might be something we don’t need, it doesn’t necessarily mean that it is utterly pointless. It could be that, despite how little we need it, it might actually be kind of cool that someone came up with the idea, which is rather different than something that is so stupid that it’s funny. For instance, last week’s Rock-Paper-Scissors Glove is, in my opinion, most definitely utterly pointless and funny, but this week’s installment? 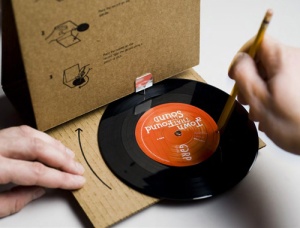 Audio engineering company GGRP Sound sent a 45rpm record in a corrugated cardboard sleeve that doubles as a record player. You can put it together in one single step. Once in position, you can play and scratch using a pencil.

No, we don’t need it, but it’s just about the coolest thing I’ve seen lately.

Back in December, I wrote a post declaring my appreciation for graphic and industrial design, stating that they represent one of capitalism’s few redeeming values.

I still stand by my comments in that post, but as I browse my favorite websites featuring design, particularly prototype or new product designs, I come across many items that elicit the reaction, “Who the HELL needs something like that?”

Listen, I try to be open-minded and non-judgmental, but some things just seem to cross some kind of line, where any honorable creative elements seem overshadowed by frivolity, superfluousness, banality, or triviality.

And so, I’ve decided to start a new series here at Fish & Bicycles titled Stuff We Don’t Need (aka SWDN), because a thing can be simultaneously utterly pointless and funny at the same time.

For the inaugural SWDN post, I bring you the Rock-Paper-Scissors Glove:

Per the inventor, Steve Hoefer (via Gizmodo):

This is a glove that plays a very competitive game of Rock Paper Scissors against the wearer. It learns how they wearer plays and plays to their weaknesses…

It remembers how you play so that if you always open with Rock it will tend to open with Paper. And if you tend throw a Paper after a Rock it will counter it with Scissors. The glove’s current record for best-of-five matches against me is 71 wins and 62 losses.

Well, ok. I don’t need one. You’ll have to decide for yourself.

Regardless, you know you want to check out the video of the glove in action!