So, I’ve been thinking about Donald Trump WAY more than I ever desired, more than my heart and soul can bear, and for that reason alone his victory is a dreadful, dreadful thing, a kind of assault, a violation.

And yet, there’s something that rubs me the wrong way about the coverage of Trump’s behavior on Twitter.

As has been widely reported, he is an avid Twitter user. But, unlike President Obama, who has a professional on staff who tweets on his behalf, Trump tweets on his own, in all his buffoonish, goonish ugliness.

Saturday Night Live has thankfully been relentless in their lampooning of Trump, thanks largely to Alec Baldwin‘s genius impersonation, but their latest stab, a skit specifically about Trump’s use of Twitter, didn’t make me laugh.

Because I found it WAY more disturbing than funny.

As much as I feel justified in demonizing Trump as the demon that he is, it must also be pointed out that Donald Trump is the product of American culture, not its creator. Notice how the SNL skit is about Trump retweeting the nutjob tweets of others. Not that Trump doesn’t post enough of his own nutjob tweets, but he’s engaged in a wider culture.

It’s one thing, trying to get one’s head around the fact that this one dangerous man-child will be ascending to the most powerful position on the planet, and another thing entirely to consider the bigger picture, the Petri dish from which he emerged, a dish festering with materialism, celebrity worship, and reality TV.

How many more Trumps-in-the-making are out there, and who is talking about the paradigm shift needed in America in order to stop the production of them?

The former question is too scary to spend a lot of time thinking about.

The latter, well, as the 12-step programs say, the first step is admitting you have a problem.

America, we clearly have a problem.

Tomorrow is National Chocolate Chip Cookie Day. Looks like I picked the wrong week to get back on my low-carb diet.😢 https://t.co/FJAtLVlMZV

Just a quick update on my Out of Office post from last Thursday.

I’ve kinda had second thoughts about taking a complete break from blogging, and have decided, instead, to keep one foot in the online publishing world using Twitter.

My plan now is to use only Twitter for a while and post my tweets to the blog.

I have no idea whether or not this idea will work out, but it feels better than having Fish & Bicycles go completely silent indefinitely.

A substantive analysis of Star Wars: The Force Awakens!

Also, it points the way to a very real solution for those who disliked the new Star Wars installment but passionately love the franchise.

Simply drink a glass for each suggested wine pairing in this article while re-watching the movie, and I guarantee that you won’t notice all those nitpicky things you complained about the first time.

Find out why Luke Skywalker is a Barolo and Princess Leia is Champagne: https://t.co/umBQvvgYRd pic.twitter.com/rBdge7aMNv

Reinert said the values Bisquick sought to embody in the design of the campus are the same that drive the company itself: simplicity, freshness, quality, and fun. To that end, Bisquick added many communal facilities, including a full-size saltwater swimming pool, 10 onsite pancake bars stocked with organic fruits and various flavors of syrup, a Japanese zen garden hand-constructed in Kyoto and reassembled on campus, and a weekly lecture series at the grounds’ 2,000-seat amphitheater featuring speakers such as futurist Michio Kaku, fiction writer Stephenie Meyer, and former British prime minister Tony Blair.

While many in the area have hailed the arrival of Bisquick, some longtime residents—wary of higher rents and the company’s famously insular corporate culture—have expressed skepticism.

“Bisquick is just another one of these Silicon Valley behemoths that moves in and totally changes the community—and not for the better,” said local resident Peter Watson, who noted that the land used for Bisquick’s indoor rock climbing wall used to be open park space that the city sold to help attract the company. “When I moved here in the ’80s, it was all students and families; now, my whole street is nothing but Bisquick millionaires in their electric cars and luxury penthouses.”

“My neighbors and I have complained to the city council, but with Bisquick’s deep pockets, there really isn’t anything we can do,” Watson added. “I guess we just have to put up with it and hope that, sooner or later, this pancake bubble bursts.”

I’ve mentioned numerous times here at Fish & Bicycles that I dabble in Buddhism (one example), and I’ve tried to sustain a regular meditation practice off and on for many years, so it’s fair to assume that I think very highly of the process.

And yet, Buddhism and meditation are highly susceptible to suffering at the hands of New Age pretension, and meditation has notoriously been stripped of its religious and spiritual origins as of late, and co-opted as a productivity tools for businesses.

I use and mostly enjoy the iOS app Flipboard on my iPhone, and like other news aggregators, when you first setup the app you enter general topics you are interested in so that Flipboard knows what kind of content to push to you. Sadly, however, the vast majority of articles I see on Buddhism, meditation, or spirituality look like the one in the screenshot provided here.

Well, all that’s to say, as much as I continue to aspire to living a more spiritual life and to sustaining a daily meditation practice, there are days when the spirituality industry gets to me, it’s been getting to me quite a bit lately, and so when I came across today’s Tweet of the Day installment, posted by one of the funniest guys around, Rainn Wilson, it just totally hit the spot.

Rainn tweeted the following video titled F*ck That: A Guided Meditation by Jason Headly, whose short film titled It’s Not About The Nail is one of the funniest-whilst-insightful comedy bits on couples I’ve ever seen.

(Disclaimer: F*ck That: A Guided Meditation is laced with profanity, and may therefore be offensive to some and/or NSFW for others.)

Given my recent post waxing nostalgic and all sentimental on the subject of fatherhood, including references to the common fears that seem to come with the job…

…this TOTALLY cracked me up! 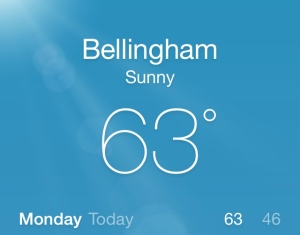 …without thinking too much about global warming, my thoughts also go out to my friends and family in the Northeast, who are facing this instead:

All you need to know about winter storm "Juno" http://t.co/L8vhKauJrA pic.twitter.com/GxXt6YZixp

He will always be Sulu to me (sorry John Cho), I appreciate how he leveraged his celebrity by coming out as a gay man in 2005, becoming a strong, vocal LGBT advocate, and I find his Facebook feed consistently entertaining.

That he’s also a Buddhist is news to me, and since I dabble in the teachings of the Buddha, another reason to like him.

Today’s Tweet of the Day installment is from Lion’s Roar, an online Buddhist publication, and if you follow the included link you get to read Mr. Takei telling his own, inspiring story: