Yesterday, I posted the first new installment in my Stuff We Don’t Need series since December 2011. That post was bicycle-related, in that it was a critique of a $3,600 bookshelf that doubles as a bike rack.

But then, as for every right there’s a wrong, every left a right, north a south, black a white, yin a yang…

Today, I bring you the first new installment in my Stuff We Need series since March of this year.

Now THAT is Stuff We Need. I would buy one in a second!

It’s cheap, durable, made with recycled materials, an eco-friendly alternative to the single occupancy fossil fuel powered vehicle, and it actually works! (See video below.)

Beyond the environmental angle, Gafni and his business partner, Nimrod Elmish, are truly a couple of philanthropy-minded menschen.

“In six months we will have completed planning the first production lines for an urban bike which will be assisted by an electric motor, a youth bike which will be a 2/3 size model for children in Africa, a balance bike for youngsters learning to ride, and a wheelchair that a non-profit organisation wants to build with our technology for Africa,” he said.

This is one of the best stories I’ve read lately, a positive, hopeful piece in a sea of news dominated by everything from the depressing to the horrific.

Check out this video on Izhar Gafni and his work. He’s quite an endearing fellow.

This post started as an installment for my Tweet of the Day series, because, given my oft-stated love of bicycles, I couldn’t pass up a bicycle-related tweet by Colossal‘s Christopher Jobson:

Check out these chandeliers made from salvaged bicycle parts by Carolina Fontoura Alzaga http://t.co/qg0sTNHs

Then, I considered it for my Eycatchers series, given how cool the photos of these chandeliers (see more below) are:

But really, this post is truly best suited for my Upcycling series.

For, as artist Carolina Fontoura Alzaga explains in the video below, she has lofty goals for her work, goals that extend beyond the aesthetic, goals to promote the value of recycling, reusing, repurposing, upcycling.

There’s something SO cool about these chandeliers, how they appear at once modern and old at the same time. Alzaga describes them as inspired by Victorian-era aesthetics, but I look at them and they seem to go WAY further back than that, like they could be very much at home in a castle, in the company of chainmail and armor.

One thing’s for sure, as you watch the artist at work, whether salvaging bicycle parts from the dump, stripping the parts down and organizing them in her shop, or constructing, welding, painting and assembling the finished pieces, it’s clear that Alzaga is a powerful woman who might very well get her message across.

Here are some more images of her work, followed by a video about the artist. 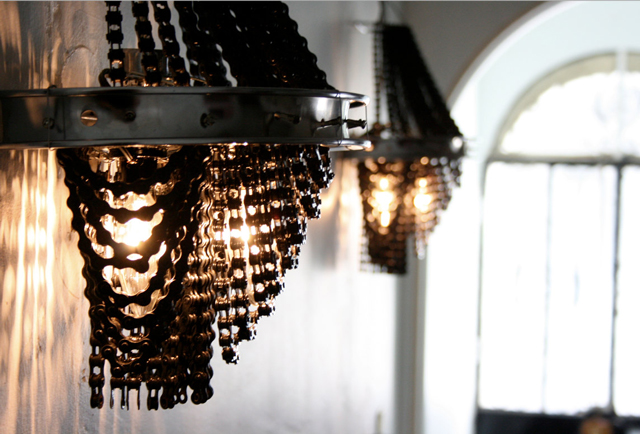 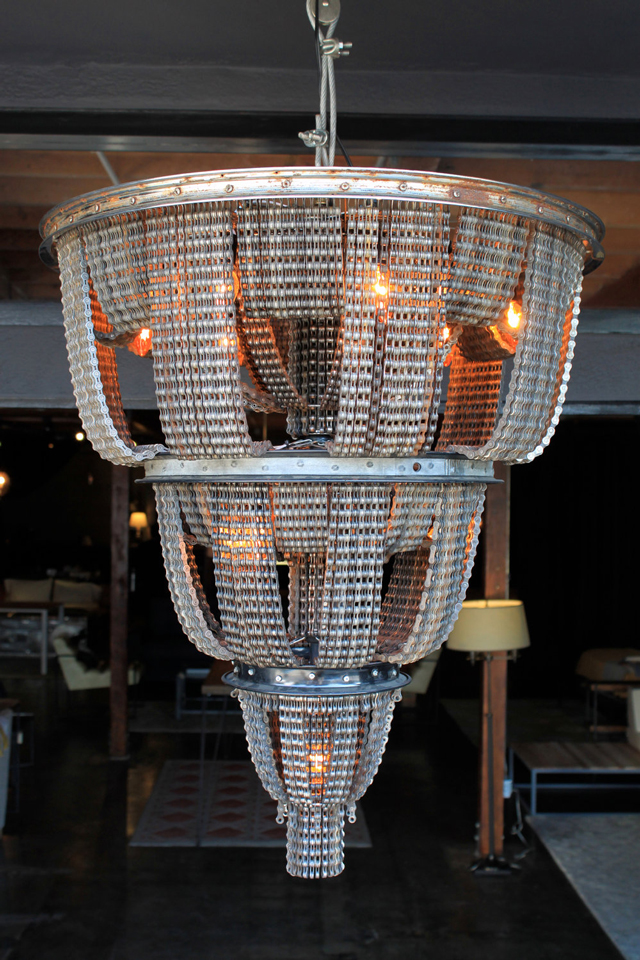 I suppose you could say this is a kind of upcycling.

Some beautiful re-purposing of barns from WebUrbanist: http://t.co/QUjA6Ko6

It’s been awhile since the last installment in my Upcycling series, a series focused on that most creative form of recycling, whereby old stuff, stuff that might otherwise be discarded, is repurposed into useful stuff, or at least into artful, decorative stuff.

(Oh, and just in case you’ve been anxiously waiting for my own next upcycling project, since I haven’t posted one since April, I am close to finishing something. Teaser: What do you get when you cross this with this?)

In the meantime, I really enjoyed this collection of pieces, curated by blogger R-Incarnation, as part of his/her introduction to upcycling.

I particularly like the TV bar, the Coke bottle chandelier, and the suitcase medicine cabinet. 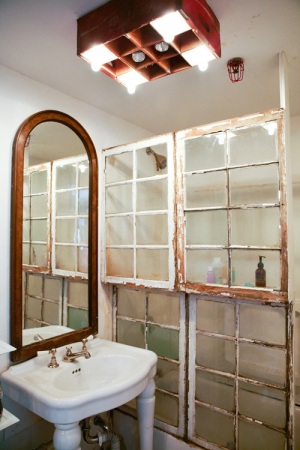 Thanks to a tweet from the RE Store, Bellingham, Washington’s purveyors of reclaimed household and building materials, I came across a project by Brooklyn, New York brothers-builders-designers Evan and Oliver Haslegrave that takes the Shabby Chic style of interior design and cranks it up to eleven.

Perfect for this installment of my Upcycling series!

Transforming a space that had been empty, save for the bathroom, into a home, the Haselgraves pulled out all the stops, using a wide variety of reclaimed materials, including copper pipe, lumber, molding, windows and doors, as well as choice antique store finds scattered about. (My personal favorite is the croquet mallet chandelier. See below.)

While I have to admit that it’s all a bit too shabby for my taste, meaning I prefer a more refined design in my own living spaces, I can’t help admiring their having taken an idea and an approach and totally going for it like this.

Here are some more images (via Design Sponge): 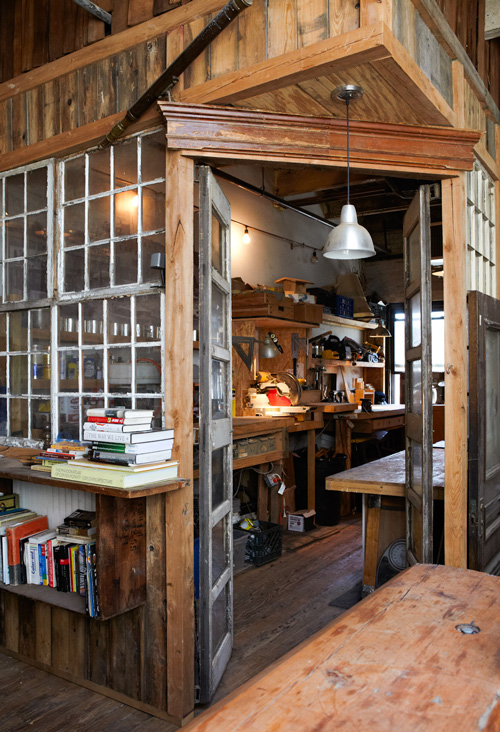 In this installment of Upcycling, I’d like to highlight my current favorite upcycler, Michael Smith from Milwaukee, Wisconsin, USA, whose Etsy store is named Destructive Testing.

In my last Upcycling post, I mentioned that I love how these projects range from useful new items to purely aesthetic objects, and Michael Smith does a wonderful job of creating imaginative, playful, even elegant pieces, most of which strike a harmonious balance between form and function.

His lamps, in particular, stand out for me, utilizing a wide variety of old found objects married with vintage-style bulbs, resulting in pieces that magically look decidedly modern. 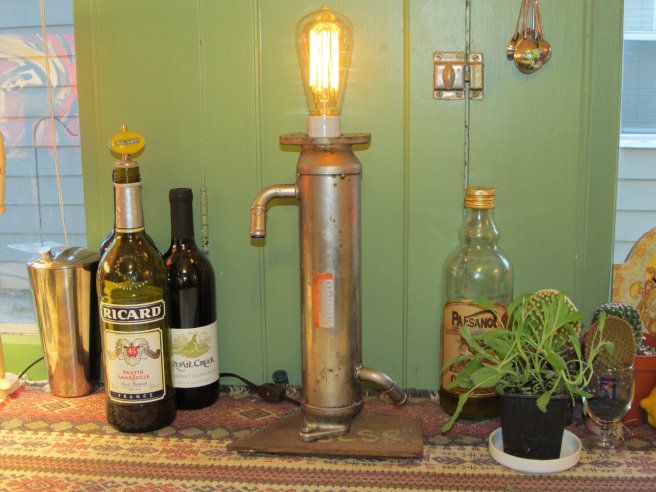 And here he combines the two:

Smith also has a good eye as a curator, which you can see in action at his blog.

One of the many things I love about upcycling is that the projects I’ve seen, as well as the few I’ve done myself (latest example), range from useful, to purely aesthetic, to simply silly and playful.

Dave Haldane of Tallahassee, Florida posted the following video to YouTube, documenting his conversion of an electric clothes dryer into a ping pong ball shooter, and initially it left me feeling jealous of his engineering skills and his collection of tools.

Once I got over that, however, this project just made me happy due to its downright ingenuity and goofiness.