I like big cities, really, I do! Where I grew up, in Central New Jersey, I could drive 45 minutes to New York City, 60 minutes to Philadelphia, 3 hours to Washington, D.C., and 5 hours to Boston. One of the greatest things about living in Bellingham is that Seattle and Portland are only 90 minutes or 4.5 hours to the south respectively, and Vancouver is only 90 minutes north.

I love big cities…but I wouldn’t want to live in one.

For one thing, I’d miss items like this in the local paper:

BELLINGHAM – An ice cream social to celebrate the naming of a new Mallard Ice Cream flavor will take place from 1 to 3 p.m. Sunday, April 11, at The Leopold Ballroom, 1224 Cornwall Ave.

The new name and flavor will be kept secret until its Sunday debut. All that has been revealed so far is that the ice cream will be in honor of Kulshan Community Land Trust, a nonprofit organization that provides affordable homeownership to people of modest means.

I love seeing people I know wherever I walk, I love that there’s usually only 1 to 2 degrees of separation here, I love that it takes me no more than 15 minutes to get from my house to the farthest parts of town that I regularly visit, and most trips are 5 to 10 minutes, I love locally-owned businesses, like Mallard Ice Cream, that become community institutions.

I know these these things aren’t really nonexistent in big cities, but I sure wouldn’t like Bellingham half as much as I do if they didn’t exist here.

Hot on the heels of Wednesday‘s Eyecatchers installment, here’s another shot I took of an art installation in Vancouver, B.C.

Quite a different face than Wednesday’s, this is a close-up of a sculpture, located in Yaletown Park, titled Eros Bendato Scripolato by Polish artist Igor Mitoraj.

It’s impossible to get an idea of the scale of the piece from this photo, but I love the texture, color, and moodiness of this composition.

Oh, and I guess I should mention that I messed around with the orientation, too!

If you haven’t seen the sculpture installation in Vancouver, B.C., titled A-maze-ing Laughter, by Chinese artist Yue MinJun, I highly recommend it.

Located where Denman Street, Davie Street, and Beach Avenue converge to form Morton Triangle, on the edge of English Bay and Stanley Park, this collection of 14 bronze figures, each approximately 8-feet tall, each bearing the same, laughing visage of the artist himself, is an intoxicating piece of work.

Intoxicating, meaning it’s impossible to not at least smile, if not actually laugh along, with the 14 giants. I don’t know whether to call it uplifting without being sentimental, or just uplifting and unapologetically sentimental.

Anyway, here’s a close-up I snapped of one of the figures: 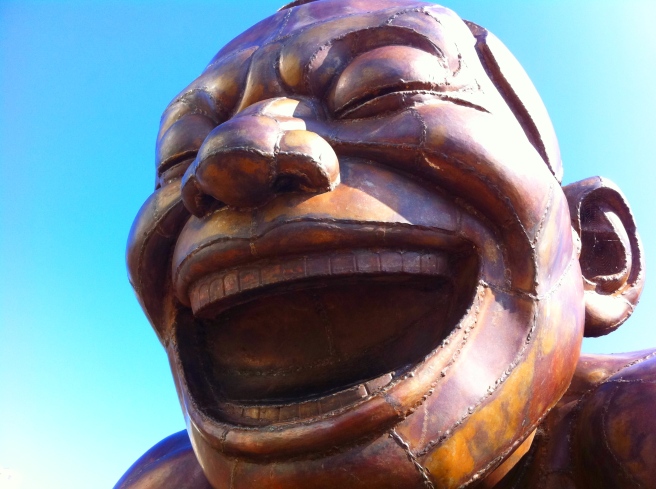 Be sure to check out additional photos here. 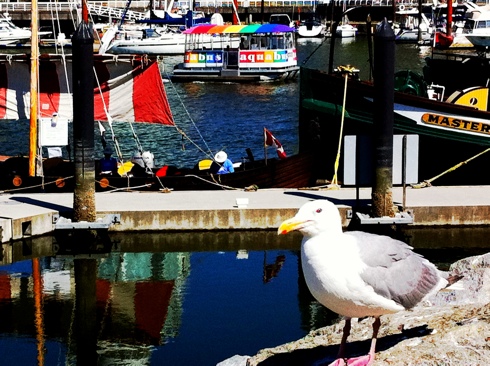 It’s going to be quiet around here at Fish & Bicycles for the next few days, as the family and I are heading north tonight for Beautiful British Columbia!

Two nights and a day of city time in fabulous Vancouver, followed by two days and one night in gorgeous Squamish, home of the magnificent piece of granite you see here to the right, a rock climbing mecca called the Stawamus Chief.

For those of you who don’t know the geography, this involves driving about 25 minutes north from here in Bellingham to the U.S.-Canadian border, havin’ a quick chat with a Canuck border officer about passports and our plans, driving another 45 minutes or so to Vancouver, and then on Saturday morning driving another hour north to Squamish.

As easy as pie!

In the meantime, feel free to browse around Fish & Bicycles in any of the following ways:

I’ll back at this blogging thing before you know it, but if you are REALLY going to miss me, I wouldn’t mind if you left me a comment telling me so. (hint, hint, nudge, nudge)

Ok, I know, I’ve been obsessing on The Flaming Lips here this past week, and I promise I’ll move on to different topics soon, but there’s just no way that I can not reflect on last night’s concert, a concert that was arguably the greatest show I’ve ever seen.

Saturday, as Bellinghamsters will recall, was an absolutely stunning bonus summer day, and the only reason I didn’t totally enjoy it was because there was rain in the forecast for Sunday, when I was due to attend the Lips show, outdoors in Vancouver’s Malkin Bowl Amphitheater. I’d been looking forward to the concert for months, and there I was on Saturday, in the midst of a gorgeous sunny day, trying to picture standing in a muddy field in the pouring rain.

And when I awoke on Sunday it seemed my worst fears had manifested. It rained non-stop all morning.

However, by noon the rain stopped, and while the skies didn’t clear, there were occasional, fleeting sunbreaks, and as my friends and I set out northward towards the border I was starting to be optimistic.

We stopped for food and drink at a restaurant right on the water near the convention center, dined outside, and the excitement of the impending show grew as we enjoyed a lovely meal in a lovely setting.

From the restaurant, we walked around the seawall for a few minutes before heading into the interior of Stanley Park towards the venue. I have to admit that I was disappointed when I first set eyes on Malkin Bowl. It seemed incredibly small and the field was muddy and it was hard to imagine the hugeness of a Flaming Lips show in such a small place. Most of the time I prefer a smaller, more intimate setting for live music, but the Lips just aren’t that kind of band.

Once we settled in at the pub adjacent to the amphitheater, I started to really enjoy the setting, nestled amongst towering firs and cedars and spruce, it was tremendously peaceful.

As for the show, words inevitably fail to capture the totality of the experience, and it seems like everything I think of is cliché. Yet, there’s a fine line between cliché and quintessence, and it seems to me that the Flaming Lips strive to create the quintessential psychedelic experience for the audience.

The concert was a lush audio and visual experience, and I enjoyed every single minute of it. The song selection was great, the band was in top form, and Wayne, in particular, was every bit the warm, wacky mad genius he’s known to be. He was characteristically talkative throughout the show, and when he’d say, “Come on, come on, come one, Vancouver!” you really had the sense that he really needs to know that the audience is having the best possible time they could have, and that if he sensed that they weren’t he couldn’t go on.

At the end of the show, as many were making their way towards the exit, a small, dedicated group of fans remained in front of the stage, hoping for one more encore. Suddenly, Wayne came out to address the crowd, pointing out that the venue prohibited music after 10pm, and he very sincerely apologized and expressed his hope that everyone could hold on to what they liked about the show and not let the understandable disappointment overshadow the rest of the evening.

It certainly didn’t overshadow anything for me!

Thanks to the wonders of YouTube, there’s actually a handful of clips from last night’s show, and fortunately someone posted my favorite song of the evening:

As mentioned Wednesday, I’m bound for Vancouver on Sunday to see the weird, the wonderful, the wacky Flaming Lips.

I still don’t really know what this song means and why the fake blood is particularly important, but I love it! It’s glorious, operatic, and supremely freaky in all the right ways.

Back in July, I sounded my barbaric yawp about having just purchased a ticket to see The Flaming Lips in Vancouver, B.C., the show is now just days away (Sunday), and I’m just about going out of mind with anticipation!

Right now, I’m working on a transportation plan, aiming to drive to the nearest Sky Train station, leave the car there, ride the train downtown, and then take a bus to Stanley Park. Woot!

Yes, it’s an outdoor show and there’s rain in the forecast, but my excitement is not diminished in the least! I will have full rain gear, layers, boots…heck!…I live in Bellingham for crying out loud!

And now, to keep the good Lips vibes going, and to share a little Flaming goodness with those who will not be able to make it to the show, I offer up this clip of (Update) a song from their latest album, Embryonic, a little taste of these weird Oklahomans.

Note:Nice to see Wayne stretching out on the guitar. It’s easy to forget that he has chops.

Although words can’t fully describe how frickin’ excited I am about having just purchased tickets to see The Flaming Lips at the Malkin Bowl in Vancouver’s Stanley Park, in September…

…um…I think I need the help of Walt Whitman.

I’m so EXTREMELY excited that I feel the urge to sound my barbaric YAWP over the roofs of the world! 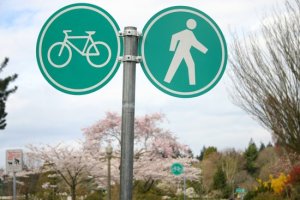 Years ago, I was in Vancouver with my bicycle and I saw the sign posted here. It was a revelation. A major city could actually think well about modes of transportation other than the automobile! I didn’t think it was possible.

On that same trip, I saw another sign, which read:

The sign provided some basic information, and it turns out that speaking bicycle requires a refreshing and accessible small vocabulary.

ring-ring: A sound made by a bicycle bell; a signal made by a cyclist, out of courtesy, to alert a pedestrian that a bicycle is coming their way

honk-honk: A sound made by a bicycle horn; (see ring-ring)

on your left: A vocal signal provided to a pedestrian by a cyclist, indicating that the cyclist would soon be passing on the left.

thank you: A vocal signal provided to a cyclist by a pedestrian, out of courtesy, indicating that the pedestrian has received signals from the cyclist such as ring-ring, honk-honk, and on your left

And that’s it! Super easy!

Like any language, speaking Bicycle depends on two-way communication. For instance, a cyclist could use the correct grammar — ring-ring and on your left — correctly, but if the pedestrian they are trying to communicate doesn’t speak Bicycle, or they have their noise-cancelling earbuds in place, blasting Tchaikovsky’s 1812 Overture, a crash and serious injury could occur.

This morning I was on my daily commute to work and decided to take the scenic route, to lengthen the ride in order to get more exercise, and as I pedaled across the Taylor Dock, as is typical on this popular bike-pedestrian pathway, I came across a number of folks enjoying an early stroll.

As I approached the first cluster of folks, who were taking up the entire pathway, I said to them in Bicycle, “ring-ring. on the left!”

To my delight, as I passed by, the pedestrians spoke back to me in Bicycle, “Thanks for the ring-ring!”

Of course, as I approached the next gaggle of walkers, using my best Bicycle to communicate with them, the woman I came closest to as I passed seemed to go into a little panic, and she certainly didn’t speak any Bicycle back to me.

I’d love to see a Learn to Speak Bicycle public education campaign in Bellingham, because Bicycle is so easy to learn and it so mutually beneficial for cyclists and pedestrians.